Speaking of The Economist 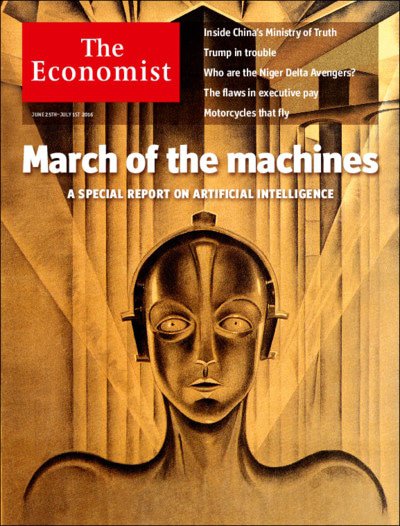 : Before being felled by rhinoviruses I'd intended to do a takedown of that magazine's June 25th special issue on Artificial Intelligence.

(The reason for a special issue was that the June 23rd Brexit vote result was to be announced at just the wrong point in The Economist's print-production cycle.  They needed something glamorous to plug the gap so they could give over the following issue to the Brexit result.)

I never did get round to that takedown, but fortunately psychologist James Thompson has done the job for me, very thoroughly.

As part of a holiday ritual I buy The Economist to take to the beach and find out if it has improved. The issue of June 25th looked promising, in that it had a special report on artificial intelligence, in which they said that the intelligent response to the dislocation caused by this development would be “making education and training flexible enough to teach new skills quickly and efficiently.” Quite so. They should have added “but the intelligent will always learn more quickly and will generalize their learning more widely, and to greater advantage” . . .

The authors don’t mention that the current elite belief that mass immigration is required to provide low skilled workers does not sit well with the promises of artificial intelligence: governments seem to be hell-bent on bringing in people to do jobs which , if the advances of artificial intelligence are to be believed, shortly will not exist. [The Economist is economical about intelligence by James Thompson; Psychological Comments blog, July 9th 2016.]