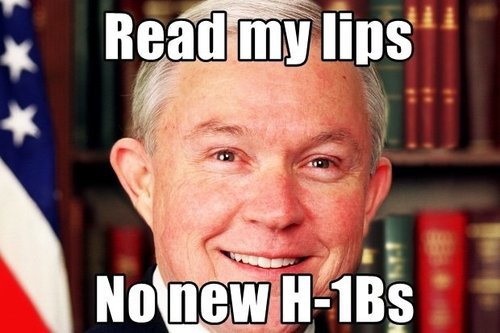 You know and I know that the last thing the American tech industry needs is more H-1Bs as indentured servants to drive down the price of American labor, but ComputerWorld is startled to see the head of the Senate Immigration Subcommittee say that:

Sessions last week accused the tech industry of perpetuating a "hoax" by claiming there is a shortage of qualified U.S. tech workers.

"The tech industry's promotion of expanded temporary visas — such as the H-1B — and green cards is driven by its desire for cheap, young and immobile labor," wrote Sessions, in a memo he sent last week to fellow lawmakers.

Last summer, Sessions attacked Microsoft's push for more H-1B visas as it laid off 18,000 employees. Now, as subcommittee chairman, Sessions will have the ability to conduct investigations and hold oversight hearings.

When I say they're startled, I mean this: No need to boost H-1Bs, says GOP Senate immigration head... Wait. WHAT? By Richi Jennings, IT Blogwatch, January 23, 2015.

The above is Jennings's illustration. Here are a few of the reactions Jennings got from around the techoblogosphere, or whatever they call it:

Score one for the Republicans! I'm a pretty solid democrat, don't live in Arizona but I'm starting to like Jeff Sessions.  MORE

And Ron Christian agrees the qualified tech labor shortage is a myth:

To the outside world, my manager says there is a shortage. [But in] meetings, he states openly that his intention is to replace all new openings with H-1B workers. Entirely coincidentally...all of the attrition last year was amongst regular (non-H-1B) employees. … "Qualified" in this context means "willing to work for third world wages and no benefits."  MORE

But G. Wu opines "the reality of the situation":

The tech industry does want "cheap, young and immobile labor." … Whether or not there is a shortage depends on your point of view. ... There will never be enough...for the people who want to hire programmers at $2 an hour.  MORE

Wait, "immobile"? Kirk Strauser gives his view from the trenches:

The H-1B employees I know - my personal friends, people I hang out with and trust - describe a legal hellscape that's pretty much exactly indentured servitude. One of them managed to escape a bad situation by hooking up with a major corporation who could expedite the process to have the transfer done within a couple of months. That's two months of walking on eggshells so that they didn't get fired and deported. … You're on crack if you think an H-1B isn't a recipe for suckishness. ... The situations I witnessed firsthand were terrible.  MORE

That part about the experience of H-1B's is what Sessions meant by "cheap, young and immobile labor"—and it would save all those young people that unpleasant experience if they would stay home.