A week or so ago, amnesty critic Ann Coulter revealed some ugly facts about immigration from an embargoed report published by Phyllis Schlafly’s Eagle Forum.

Now the report is available to concerned citizens: just click on the following link to reach the 48-page paper, How Mass (Legal) Immigration Dooms a Conservative Republican Party. It is presented in the annoying Scribd format, but a click on Download button plunks it onto one’s own computer in a nice readable PDF.

The report redesigns some inconvenient-to-amnesty charts to emphasize the current failure of assimilation. I have long been a fan of liberal Pew Hispanic Center’s little brown graphs demonstrating the obstinate refusal of Hispanics to absorb American values and their cluelessness about why the US offers opportunity and Mexico et al do not. One example: Hispanics are the most negative group in America toward capitalism ever as they profit from it.

Even living in the United Stated for generations does not educate Hispanics about the wisdom of constitutionally limited government. Of course, it doesn’t help that government schools indoctrinate young minds with an anti-America curriculum.

Every House Republican should be strongly educated to the fact that the big-government preference of Latin cultures does not go away: Hispanics are ready-made Democrats, so don’t import millions more of them. The following Pew graphic gets a full-page redesign by Eagle Forum shown further below. 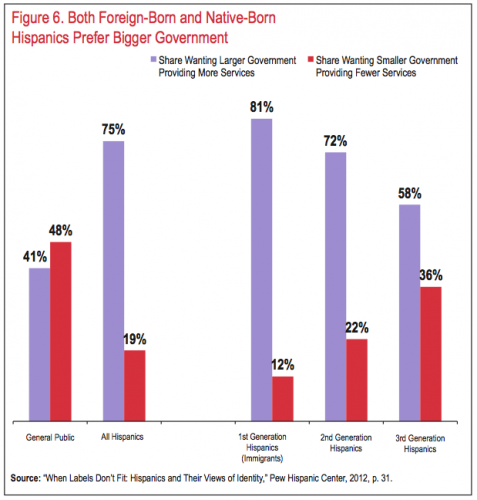 The Eagle Forum report is a double-barreled blast of accumulated knowledge about the stubbornness of diverse culture. Friends of American sovereignty could use its helpful polling data should they phone House Republicans with their concerns: