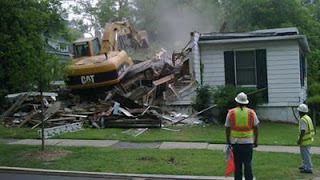 Duke Tears Down House Where The Crime Didn't Happen

I learned today, via the Durham in Wonderland blog, that the administration of Duke University, embarrassed about the scandal caused by their role in the Duke Rape Hoax, has decided to tear down the house where the crime didn't happen.

On another front, news from Durham this morning that Duke decided to tear down the house at 610 N. Buchanan. 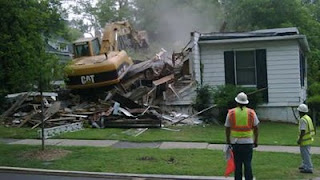 This move reverses a 2009 decision by Duke, as reported by the Chronicle:

Executive Vice President Tallman Trask said the University contacted attorneys representing members of the 2005-2006 lacrosse team about tearing down the house to build a new residence as part of the Duke-Durham Neighborhood Partnership, but the request was denied.

"610 N. Buchanan remains a piece of evidence, and so it can only be removed with the consent of all the parties," Trask said in an interview with The Chronicle in February. "The lawyers all have to agree that they don't need it. I think actually we might ask them again, but their argument was you have to actually stand in that bathroom to understand how preposterous the claims were, and the pictures just don't do it justice."

In an interview with WRAL, rising Duke senior Emily Fausch probably got at the reason why Duke decided to go forward: "It's a reminder of the past that some people don't want to be reminded of.” Indeed, I can see why the Brodhead administration and its allies among the Group of 88 would seek do everything they can not to be reminded of their 2006 behavior.