Donald Sterling: Pay No Attention To The Man Behind The Curtain—It MIGHT Be Magic Johnson, But... 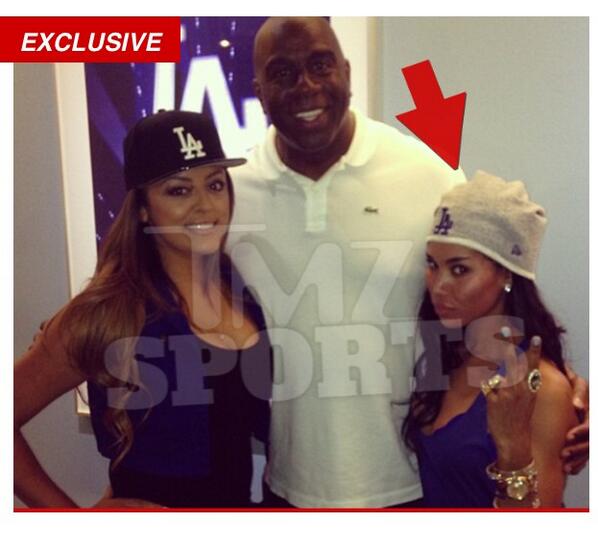 It sounds like there's a much more interesting story going on with the Donald T. Sterling donnybrook than anybody has been investigating yet. I don't know how far this story might go, but it just might go all the way from Magic Johnson to somebody really interesting.

For years, I've been pointing out that much of the hoopla over racism and sexism isn't actually about blacks or women or whatever. Instead, it serves as a cover story for ambitious, clever men to get what they want. For example, I've long been fascinated by how mortgage lenders like Angelo Mozilo, Roland Arnall, and Kerry Killinger used the rhetoric of the War on Racist Redlining to blow up the housing bubble.

Obsess over racism; pay no attention to the man behind the curtain!

But in the Sterling Story, who is The Man?

I'll offer a theory about why the man might be Magic Johnson, who desperately wants Donald Sterling's NBA franchise now that the Buss family says they won't sell his old Lakers. But Magic was the front man in the purchase of the Los Angeles Dodgers two years ago. So it might be Magic's big money backers in Guggenheim Partners.

Or ... And this is really a stretch, but let me toss it out there. There's a financier in L.A. who invests some of his money with Guggenheim Partners who for intelligence and energy and guile makes Mozilo and the other mortgage guys look like smalltimers. You haven't heard much about him since he got out of prison a couple of decades ago. He's legally banned for life from getting anything in return for giving investment advice. But he's still here and he's allowed to manage his own billions. The SEC has been investigating whether the Dodger purchase by Guggenheim was something of a front for him to get back in the game.

Granted, I'm no doubt reading way too much into this. And if this story doesn't go all the way to the top, it's still really interesting. I apologize for this post wandering all over the place, but the more I looked into the story that Magic wants the Clippers, the more pieces fell into place.

Listening closely to the presumably illegally made tapes suggests that the mistress was setting the LA Clippers owner up — she's the one egging on the racial angle over her photos cuddling with Magic Johnson and Matt Kemp of the Dodgers. Originally, I assumed her minor league lawyer was her mastermind, but the news that Magic and his mysterious Guggenheim Partners backers want control of Sterling's NBA franchise suggests that there's a reasonable chance that this whole set-up originated with somebody more high-powered than her Woodland Hills attorney. (This lawyer is so obscure that his office is on Burbank Blvd. rather than on Ventura Blvd.)

In contrast, the new Guggenheim Partners firm is very high-powered. In fact, the SEC has been trying for a year to figure out if GP is so high-powered that its Los Angeles sports franchise acquisitions are done in illegal collaboration with ... well, I won't mention his name yet, but it's a smack-yourself-in-the-forehead name out of the history books of Los Angeles and finance. I'll tell you the name later in the posting, but for my readers who are at his annual Beverly Hills wingding today, why don't you ask around and see what your host thinks about the Clippers. Or ask Magic Johnson when he speaks at lunchtime on Wednesday.

For all these despicable revelations tumbling out of the hateful heart of Donald Sterling, there promises construction of a roadmap to redemption for the Los Angeles Clippers and the NBA. There's a way out for the most hated man in Los Angeles now, a way out for the commissioner's office and the owners responsible for long legitimizing and harboring a bigot and slumlord.

To bail themselves out of the NBA's worst crisis of credibility since the Tim Donaghy officiating scandal, the easy part for the NBA will be enlisting the eagerness and financial muscle of Magic Johnson and Mark Walter of the Guggenheim Partners – owners of the Los Angeles Dodgers.

For commissioner Adam Silver, the chance to turn the Clippers over to Magic Johnson and his partners is the best possible of solutions. Exit Sterling, enter Magic. It would be the greatest trade in sports ownership history since, well, Magic for the McCourts, with the Dodgers.

Magic Johnson is the ultimate cleanser in sports, and steering a Clippers sale to him could be transformative for the franchise.

Funny, though, how one of the two pictures that Donald Sterling was upset over his hired girl not taking down from Instagram was of her and Magic (see above). Sterling apparently doesn't trust anybody around him associating with Magic, because Sterling is a horrible racist (and perhaps because Magic wants to take his team away from him. Now that I think of it, the other Instagram picture Sterling was mad about was of her and Matt Kemp, who plays for Magic's Dodgers.)

Now, you may be thinking that something odd could be going on here. But if you smell a rat, you just haven't benefited from Magic's ultimate cleansing.

You see, Magic is the ideal sports team owner.

Well, unless you are part of the 70% of Dodger fans who haven't been able to watch the Dodgers on cable television so far this season because Magic and Mark Walter of the Guggenheim Partners are so deadset on raising cable rates to get back the absurd amount they overbid to buy the Dodgers.

McCourt was a terrible guy, but at least if you had paid for cable TV to watch the Dodgers, he let you watch the Dodgers. Magic (and the Guggenheim backroom boys) want so much more money for Dodger telecasts that most of the cable systems in Southern California haven't gotten on board because they'd have to raise their overall rates to subscribers.

John Maffei writes in the San Diego Union-Tribune on April 22, 2014:

How about 70 percent of Southern California not getting Dodgers telecasts?

The Dodgers signed a 25-year, $8.35-billion deal with Time Warner to run and distribute the team's new SportsNet LA.

Like the Padres' deal, which was worth $1.2-billion, the Dodgers jumped at the money before knowing the team's telecasts would be fully distributed.

Only Time Warner customers in Southern California get the Dodgers.

Verizon FIOS, DirecTV, Dish, Cox, AT&T U-Verse and Charter, which service about 70 percent of TV viewers in Southern California, do not get the Dodgers.

I was at my sister's home in Apple Valley on Easter Sunday. She's on Charter and doesn't get the Dodgers.

So we watched the Angels, whose games are available on fully distributed Fox Sports West.

Don't think the lack of distribution is hurting the Dodgers? According to Nielsen, the Dodgers are averaging about 37,000 viewers a game.

The Angels have an exciting team with top-notch stars. There is no way, however, that the Angels should have nearly triple the viewership of the Dodgers.

The Dodgers were getting about $350,000 a game last season from TV. They get about $1.5-million a game this season.

No matter what the cost, bad ratings are what you get when three-quarters of Southern California are shutout of Dodgers telecasts.

But, stop thinking about how Magic's greed is depriving a huge number of baseball fans of seeing their favorite team and get back to thinking about how racism is bad, and then you'll realize that of course the NBA should force Sterling to sell his team to Magic and friends.

By the way, who else is involved in the Guggenheim Partners' aggressive moves in the Los Angeles area? The SEC was trying to find out last year: they were interested in the activities involving the Dodger purchase of a certain Los Angeles ex-financier who happens to have $800 million invested with Guggenheim, a fellow who's got a little more mojo than lawyer Mac Nehoray of Woodland Hills.

And this giant in the history of finance also has a lot of time on his hands because he is under a lifetime ban on securities trading since his 22 months at Lompoc in the early Nineties.

The man who remade American capitalism in the Eighties.

Now I have less than zero evidence that junk bond king Michael Milken has had anything to do with Donald Sterling's downfall. I mean other than that a year ago Milken had $800 million with Guggenheim and Guggenheim has been chasing sports franchises in Los Angeles and really wants to get the Clippers away from Sterling. So forget I ever mentioned the name Milken. This story has nothing to do with the ambitions of rich men. It's about racism. Nothing else. Stop thinking about anything other than the horrors of racism.

By the way, speaking of Magic as the "ultimate cleanser," what's the over-under line for how many people the HIV-positive Magic killed by giving them AIDS? As a super-celebrity he got access in 1991 to experimental HIV-fighting medical techniques that apparently saved his life, but what about the little people who weren't first in line like him? How many were there?