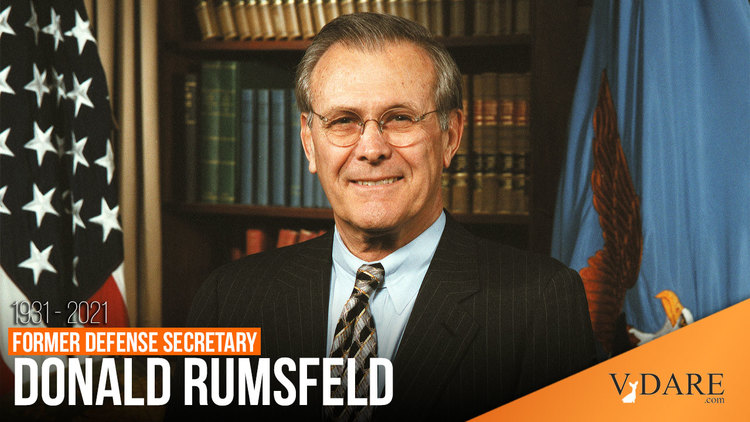 Donald Rumsfeld, who was Defense Secretary during the invasion of Iraq in 2003, has died at 88.

Rumsfeld is famous for his useful elucidation of three of four possibilities regarding knowledge:

Reports that say that something hasn’t happened are always interesting to me, because as we know, there are known knowns; there are things we know we know. We also know there are known unknowns; that is to say we know there are some things we do not know. But there are also unknown unknowns—the ones we don’t know we don’t know. And if one looks throughout the history of our country and other free countries, it is the latter category that tends to be the difficult ones.

Interestingly, few have noted that Rumsfeld left out the fourth logical necessity: the existence of Unknown Knowns.

Unknown Knowns are facts that you can look up, but that nobody knows are true and/or relevant.

As you may have noticed, my career has largely been devoted to waving my arms to try to call attention to unknown knowns. For example, there are facts that everybody apparently knows about crime and schools when they choose where to live, but that nobody seems to know anymore when talking publicly about policy.

Regarding the Iraq War, on January 13, 2003, several months before the U.S. invaded Iraq, I published in The American Conservative an article entitled “Cousin Marriage Conundrum” about one of the most concerning Unknown Knowns:

Many prominent neoconservatives are calling on America not only to conquer Iraq (and perhaps more Muslim nations after that), but also to rebuild Iraqi society in order to jumpstart the democratization of the Middle East. Yet, Americans know so little about the Middle East that few of us are even aware of one of the building blocks of Arab Muslim cultures: cousin marriage. Not surprisingly, we are almost utterly innocent of how much the high degree of inbreeding in Iraq could interfere with our nation-building ambitions.

In Iraq, as in much of the region, nearly half of all married couples are first or second cousins. A 1986 study of 4,500 married hospital patients and staff in Baghdad found that 46 percent were wed to a first or second cousin, while a smaller 1989 survey found 53 percent were “consanguineously” married. The most prominent example of an Iraqi first cousin marriage is that of Saddam Hussein and his first wife Sajida.

By fostering intense family loyalties and strong nepotistic urges, inbreeding makes the development of civil society more difficult. Many Americans have heard by now that Iraq is composed of three ethnic groups—the Kurds of the north, the Sunnis of the center, and the Shi’ites of the south. Clearly, these ethnic rivalries would complicate the task of reforming Iraq. But that is just a top-down summary of Iraq’s ethnic make-up. Each of those three ethnic groups is divisible into smaller and smaller tribes, clans, and inbred extended families—each with its own alliances, rivals, and feuds. And the engine at the bottom of these bedeviling social divisions is the oft-ignored institution of cousin marriage.

It wasn’t that these facts were unknown. I looked them all up online. But virtually nobody seemed to know that they were known, making them an example of Unknown Knowns.

On the other hand, to be fair to Rumsfeld, the known facts about cousin marriage in the Middle East weren’t as much Unknown Knowns as the data about crime and intelligence (which Charles Murray documents in Facing Reality: Two Truths About Race in America) when The Establishment declared the racial reckoning. Cousin marriage rates were even more obscure back then than they are now. Yet, Rumsfeld was in charge of the vast Pentagon so he had access to somebody somewhere who knew the truth about nation-building in the Middle East.

To his credit, Rumsfeld wasn’t as enthusiastic about the Iraq Attaq as his friend Dick Cheney. To his discredit, he didn’t stand up to Cheney’s reality distortion field.

I’ve long wondered if their unfortunate reaction to Mohammed Atta’s 9/11 atrocity wasn’t influenced by Cheney and Rumsfeld’s years in the 1980s playacting running the Acting Executive Branch in Oliver North’s scheme for post-apocalyptic continuity of government.

North argued, not unreasonably, that the federal government ought to have a working plan for how to carry on after a nuclear war has wiped out Washington D.C. Because they were younger men who had enjoyed very high level positions in the Ford Administration but had some time on their hands during the Reagan Administration, Cheney and Rumsfeld were recruited to play the Acting National Leadership in numerous simulations.

Periodically in the 1980s–90s, Cheney and Rumsfeld disappeared to an undisclosed location where they were joined by some federal bureaucrats, where they engaged in practicing issuing orders in response to various post-apocalyptic scenarios.

Perhaps the psychological effect of all this simulating World War III with the Soviets inclined Cheney (and to a lesser extent Rumsfeld) to react to 9/11 as if it were The Big One and to leap to a conclusion about who is to blame.

Another possibility is that Cheney and Rumsfeld actually began with a not unreasonable strategic appreciation of 15 Saudis attacking the U.S. in 2001. Perhaps they reasoned: our main ally in the Gulf is Saudi Arabia. With their vast oil, they are very useful to us, such as squeezing the Soviet economy in 1986 by cutting oil prices. But the Saudi royal family is awful. They export their crazies to blow up the rest of the world to protect themselves at home. What we need, therefore, is a second Saudi Arabia, an ally with a huge amount of incremental oil to pump, but one where we aren’t beholden to the local power structure like we are in Saudi Arabia. By conquering Iraq, throwing out Saddam, and ending the sanctions on Iraq oil, we can boost the global economy and install a less awful big oil regime in the Gulf to be our new main ally in this critical region, and thus let us downshift our relationship with the Saudis.

To me, what Rumsfeld and Cheney were thinking is one of those Known Unknowns. But to somebody somewhere who was there in 2001–2003, it’s an Unknown Known.