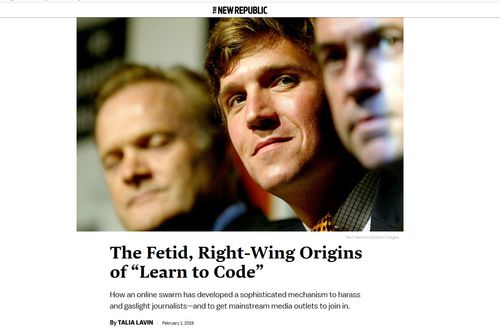 "Learn to code!" That's become a meme this week, did you know that? A bad meme, so far as Cultural Marxists are concerned.

What's happened is, there was a big bump in layoffs from media companies. CultMarx online websites like BuzzFeed and Huffington Post were especially hard hit. BuzzFeed cut 15 percent of its staff; Verizon Media Group, which owns HuffPost, cut seven percent across the board.

Well, Newton's Third Law kicked in. There was a reaction to all the weeping and wailing by the laid-off legions. The reaction was coming, of course, from Trumpists and Dissident Right types who think lefty journalists have far too loud a collective voice in our national conversations and are glad to see the volume turned down a bit.

A prominent feature of the reaction was advice to the laid-off journalists to "learn to code"—that is, to train up for productive work as a software developer. It got to be a meme, described on a meme-monitoring website called KnowYourMeme.com as, quote:

An expression used to mock journalists who were laid off from their jobs, encouraging them to learn software development as an alternate career path.

End quote. The phrase "learn to code" was showing up so much on Twitter that Twitter administrators, who of course lean heavily CultMarx, started banning it. Twitter denied there was an overall ban, but they denied it in a lawyerly, convoluted way that left us little the wiser. Controversy rumbles on.

This little spat got my attention because I actually did learn to code, back in 1969. I made a living from coding and managing coders for 32 years. I therefore say the following with some authority: "Learn to code" is lousy advice.

For one thing, coding isn't for everybody. My wife learned to code, and hated it. As soon as she was able to, she found a different line of work. Among the liberal arts and Grievance Studies types who write copy for HuffPost and Buzzfeed, I'd guess very few would enjoy coding or be much good at it.

For another thing, this isn't 1969. Coding is not a promising career path today. If you have considered learning to code, I urge you first to read the ur-document on this topic, posted by the blogger Half Sigma twelve years ago and still up on the internet, title: Why a career in computer programming sucks. "Computer programming" is the old way of saying "coding."

Half Sigma tells you at length, under five headings, why a career in coding sucks. I direct your particular attention to heading number three: "The foreignization of computer programming." Even back then in 2007 American citizens were being driven out of coding work by cheap imported labor.

Because there is no reason to think that the trend of foreignization will reverse, this will ensure that the future of the industry will be lower salaries.

He got that right. Hopes that the Trump administration might reverse the foreignization process died with the President's January 11th tweet promising citizenship to H-1B guest workers. And the corpses of those hopes now dead are being stomped into the mud by Jared Kushner and his best buddies the Koch brothers.

American coders who have been outsourced or laid off by the H-1B racket, many of whom endorsed Trump in 2016 and appeared on the platform at his rallies, are bitterly disappointed in him. They told Breitbart reporter John Binder that they have gone from being star exhibits in the Trump campaign's America First road show to being persona non grata in the White House.

Binder's January 28th report on this closes with the following sentence, quote:

The White House did not respond to multiple requests for comment for this story.

That might end up as a suitable epitaph for Trump's Presidency.