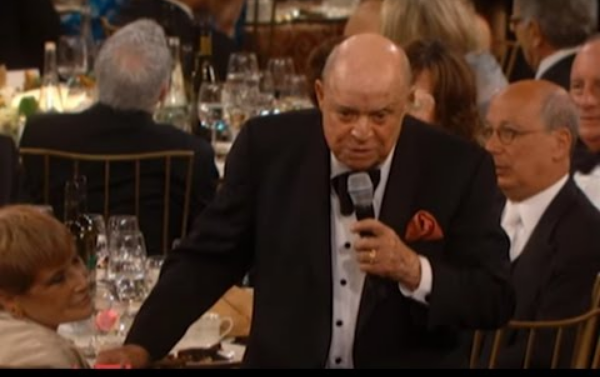 Don Rickles is being called, with apparent seriousness, a "racist" for making, about President Obama, the same jokes he's been making for half a century about his black friends and colleagues, people like Sammy Davis Jr., Nipsey Russsell, and Lawanda Page, none of whom ever thought  he meant it.

According to The Hollywood Reporter, he stood to give a speech in honor of MacLaine and made the offensive joke, saying: "I shouldn't make fun of the blacks. President Obama is a personal friend of mine. He was over to the house yesterday, but the mop broke."

Here he is in 1978 telling Lawanda Page, (Aunt Esther on Sanford and Son) that if she comes by his house, she should just  do the furniture:

Can't load tweet https://youtu.be/K-KeTNU-ods?t=290: Sorry, that page does not exist

F— this a—hole. Go to the home RIckles. You're not funny as  of Jun 9 2012. You can call a Harvard law school grad who became president? a janitor because of his skin color, and yet you've got no credential other than dumb republican d—hole comic on a stage. Get an education, and get a f—ing bed in a home, because your jokes weren't only racist and tasteless, they were grade school level. You're working for adults, you senile old f—t. Get off the stage.

"You're not funny as  of Jun 9 2012." Right! Because the world has changed, hasn't it? For one thing, we now have a "civility movement." And what in God's name makes him think Rickles is a Republican?

Rickles has been old enough to vote since 1947, which means that he voted for Truman, Adlai Stevenson, John F. Kennedy, Humphrey and every other Democratic Presidential candidate right up to Obama himself. I'm as sure of that as if I'd been in the booth with him watching him pull the lever.

Kathy Shaidle beat me to this post, by the way. Her take:

I said before Obama was elected that everything you say about him is a gaffe. And Rickles, God bless him, has made a career out of nothing but "gaffes." But apparently Obama is even more sacred than Frank Sinatra.