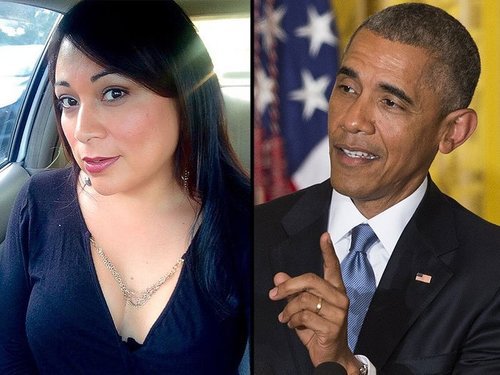 It was an odd scene, even for the freak show that Washington has become: an illegal alien transgender Mexican attended a White House event and heckled President Obama.

Curiously, BHO didn’t like the person misbehaving in “his” house, and had the person ejected when exhortations failed.

OBAMA: “As a general rule, I am just fine with a few hecklers. But not when I am up in the house. My attitude is if you’re eating the hors d’oeuvres, you know what I’m saying? And drinking the booze? I know that’s right.”

So Obama doesn’t like it when rude strangers barge in and mooch free-to-them food? Welcome to the club!

Citizens don’t like America being made the flophouse to the scroungers of the world, as Obama has done to import a permanent Democrat majority in the near future.

And of course the White House isn’t “his” — it belongs to the American people. Obama is a temporary occupant who will leave in 18 months, not a moment too soon. 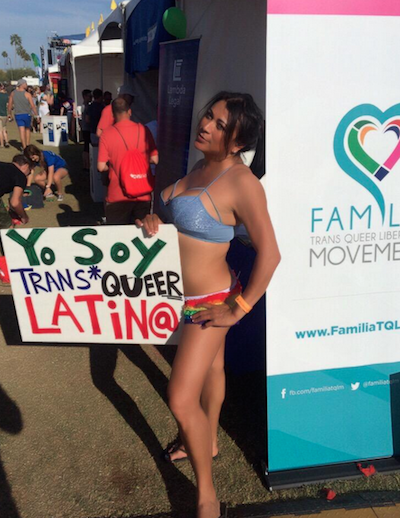 Jennicet Gutierrez (right), is the intrusive trans Mexican illegal alien who demanded that America’s hotel-like detention centers should be closed, presumably because they are not luxurious enough.

The incident was a small taste of karma against the president, a man who has used extreme diversity as a weapon. Obama has made the deal with illegal aliens that he will welcome and indulge them in return for political support. But he has trained them to demand ceaselessly and never be satisfied, so occasionally he faces the unpleasant result.

You’re in MY house': Furious Obama loses his cool at trans woman who heckled him about immigration during his speech on gay rights – before getting her removed from the White House, Daily Mail, June 24, 2015

President Obama shut down a heckler who tried to interrupt him during a speech at the White House Wednesday evening – then had her removed from the room.

Obama was halfway through delivering an address about civil rights for lesbian, gay and transsexual Americans at a reception in the presidential mansion Wednesday night when he was interrupted by one of his guests.

Jennicet Gutiérrez, a transsexual Mexican woman and campaigner, started yelling at him to close deportation centers. She was escorted out of the White House by security.

According to the woman who invited Gutiérrez to the event as her plus-one, the heckle was pre-planned to raise awareness.

Gutiérrez shouted out that she was an undocumented immigrant and a trans woman and was ‘tired of the abuse’ she claims immigration officials are carrying out on minorities.

Obama tried to ask her to stop but turned sour when she wouldn’t stop shouting.

He tried to start another sentence, but was interrupted twice more. The crowd started booing in response.

He said: ‘You know what? It’s not respectful when you get invited to somebody… [interruption] You’re not gonna get a good response from me by interrupting me like this. I’m sorry.

‘Shame on you! You shouldn’t be doing this… Can we escort this person out? Come on. You can either stay and be quiet, or we’ll have to take you out.’

He later said: ‘As a general rule, I am just fine with a few hecklers… But not when I’m up in the [White] House.

‘My attitude is, if you’re eating the hors d’oeuvres… and drinkin’ the booze… anyway, where was I?’

Gutiérrez began by saying: ‘President Obama! Release all LGBTQ detention centers [sic]’, but a chorus of shushing then drowned her out.

According to another guest, Gutiérrez had been planning the move for some time.

Angela Peoples, a director of the GetEqual LGBT activist group, told DailyMail.com that she invited Gutiérrez as her guest to the event – which was a private reception followed by Obama’s speech.

Peoples said that the two women decided on their heckle plan to draw attention to the ‘urgent crisis’ of transgender women being held in detention centers.

The pair kept a low profile at the reception and didn’t speak to other guests or anybody from the White House, she said.

Peoples added: ‘I think the President has a opportunity to deal with this… This is an urgent crisis for undocumented trans women – it warrants an urgent response.’

She said she left alongside Gutiérrez and there was no struggle.