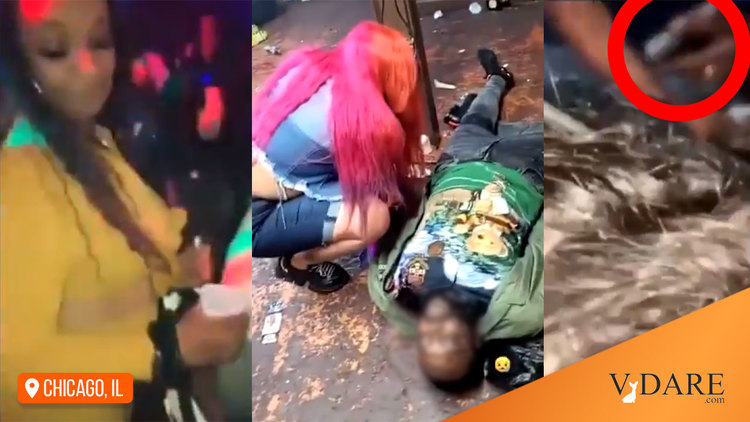 Can You Guess The Race Of This Mass Shooting That Left 2 Dead And 13 Wounded Just From The Ratio?

(CNN)Two people were killed and 13 others were wounded in a mass shooting at a party on Chicago’s South Side early Sunday morning, police said.

Several of those injured in the shooting are still in surgery, said Police Superintendent David Brown. He said four guns were seized at the building, a makeshift setup converted for a pop-up party. The victims ranged in age from 20 to 44, police said.

Brown said it’s early in the investigation and that there isn’t a known motive at this time. There are no suspects in custody, he said. …

Can you estimate the race of most of the people involved? My recent Takimag.com column “Black Lives Murdered” explains how. If the final toll were 13 dead and 2 wounded, the shooter would likely be a lone white or Asian male, who is either dead or in custody because he hung around to finish off the wounded. He might have left a manifesto. This would be the biggest story since the January 6 hoo-ha.

But when the count is 2 dead and 13 wounded, it’s almost certainly a Mostly Peaceful Black Party that intensified. The shooters don’t hang around to finish off the wounded and risk capture. Heck, they barely have a beef against the wounded, they were just standing in the general line of fire of the one or two guys they wanted to hit. The story will vanish from the news.

Of course, CNN doesn’t report the race, so Coulter’s Law implies that this was just another black-on-black mass shooting.

Local channel WGN reports that one of the murdered was named Rayneesha.

We also have video evidence.https://t.co/Jtr7rjZxWb

CNN goes on to put this in proper perspective: it’s due to Covid.

Chicago, like many large US cities, has seen a sharp rise in gun violence and shooting incidents since the end of last spring’s Covid-19 related shutdowns.

… Compared to this point last year, murders in Chicago have increased 15% and shooting incidents are up 31% in 2021, according to the latest Chicago Police data. At the same time, total crime complaints have actually declined, led by sharp drops in burglary, theft, and aggravated battery, according to police data.

Criminology experts have ascribed the rise in violence largely to pandemic-related fallout: closed schools and businesses, higher unemployment and stress and anxiety, particularly in lower-income homes. Illness and social distancing also led to fewer officers on the streets in areas that needed crime prevention the most.

The Racial Reckoning declared by CNN and its peers had nothing to do with, say, the record-breaking 25 murders in Chicago the weekend after George Floyd’s death during the Peaceful Protests that sacked the Magnificent Mile.