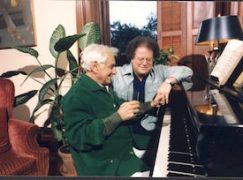 After my recent blog  In Met Conductor James Levine Sex Charges, MSM Doesn’t Want To Say Victims Are Teen Boys I got couple of private communications from people familiar with the opera world that suggested that Metropolitan Opera conductor James Levine was (a) involved with Leonard Bernstein in his pursuit of teen boys and (b) specialized in going after black teens. (Levine and Bernstein are pictured right in 1987—the scene is the Dakota apartment where, 17 years earlier, Bernstein had hosted a famous fundraiser for the Black Panthers.)

Now, the fact that a black was victimized by a white is not something you generally have dig out of an MSM story with internet research—they usually put that in the headline.

But in James Levine stories, you have to read to paragraph 9 to find that boys were the victims at all, and that's because the MSM doesn't want to stereotype gays as disproportionately attracted to underage boys—which they are, of course. (The youngest of the alleged victims named in the recent NYT story was 16.) 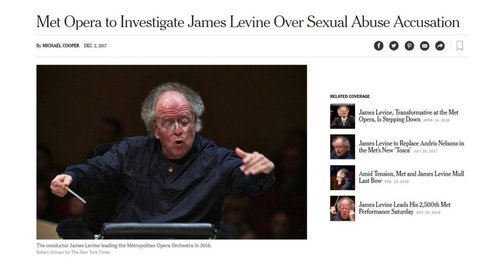 On December 3, 2017, the NYT broke a story about Levine being investigated over sex abuse, and Steve Sailer blogged:

James Levine, conductor of the Metropolitan Opera of New York for most of the last four decades, is the latest in Weinsteingate. Apparently it’s been widely rumored for many years that Levine likes teenage boys “Death in Venice”-style, which might expose several deep pocketed institutions to liability. The age of consent in Illinois is 17, 18 in positions of authority or trust, and Levine’s accuser says he was 16. But then it went on until he was 23, so … As one commenter says, this may explain why Levine wouldn’t conduct Benjamin Britten’s boy-crazed operas like Billy Budd or Peter Grimes.

What percentage of gay men accused in Weinsteingate are accused of offenses with underage males?

Here are some quotes from a gay message forum thread, starting December 3 of last year. [James Levine - it's about time | Archive link] The Rounds Bar in New York was "infamous" because young gay hustlers (over New York's legal drinking age, which used to be 19) would go there looking for older men. Levine, born 1943, would already be an older man in the 80s. Another comment:

“Back in the 80's, I corresponded for a while with one of the male dancers in the MET ballet corp. He told me it was well known by most of [The Powers That Be] at the MET that Mr. Levine often took "protégé's" under his wing. He indicated that, in order to keep the MET out of the news and away from scandal, they often paid the parents of these young, sometimes underage, abuse victims. I recall headlines (back in the 90's ?) of him getting in very hot water for accosting a young man in a Lincoln Center restroom.

[I]nsiders have gossiped about it for years, yet Levine always seemed able to buy the silence of most of his victims. I agree that because of his health, being fully confined to a wheelchair, most likely his ability to abuse is pretty well behind him now. I guess we'll see if this particular victim is finally able to get him brought to justice.”

By the way, I mentioned a rumor connecting Levine with the late Leonard Bernstein,  who died in 1990. A blog called SlippedDisc.com has a number of posts on this, one of which is  Did Leonard Bernstein have a James Levine problem? . by norman lebrecht, December 13, 2017.

Ever since the first allegations broke against the former music director of the Metropolitan Opera, there has been a rustle of hints, whispers and smears to suggest that James Levine’s alleged conduct resembled that of the great New York Philharmonic conductor Leonard Bernstein.

Coming as they do on the eve of Bernstein’s centenary, these assertions could strip the gloss off what ought to be a joyous year-long reminder of one of America’s foremost home-bred talents.

So what’s the substance?

Bernstein certainly pursued young men all his adult life. He was mostly gay and totally out in all he did. There was no hidden side to Lenny except his business activities, which were handled by Harry Kraut at Amberson Productions. On the personal front, Lenny would kiss orchestra men on the lips, shocking some older members of the Vienna Philharmonic. He was often seen going off with handsome young men for non-platonic discussions. In an age when male sex was unsafe, Bernstein was reckless to the point of abandon.

No complaint ever reached the public domain. No report of a pay-off ever came to light. That’s all we need to know.

The difference between Bernstein and Levine is that Bernstein was, for most of his life, physically attractive and intellectually compelling. His charisma was such that he did not need to proposition men for sex. They flocked to him. There was nothing seedy or underhand about his transactions. All was out in the open for everyone to see. [More, Emphases added]

Well, here's  something to throw in there—a report from Mark Steyn, who who described his  experience as young journalist (40 years younger than Bernstein, and heterosexual  himself) in meeting Bernstein:

I don’t know whether I’ve mentioned this before on your show, but the first time I met Leonard Bernstein, and I’d been warned beforehand he was a difficult interview, I was interviewing him, and it had taken a long time to get it, and I was warned before he could be a difficult man. I walked into the room, and I said oh hi, it’s great to meet you, I’m Mark Steyn. He embraced me, kissed me on the lips, and tried to stick his tongue in my mouth.[Hugh Hewitt Show, October 28, 2010]

It's too bad James Levine isn't a Republican—then we'd be hearing all about his alleged predations on black teenagers. As it is, it's one of those things the MSM doesn't want to know.