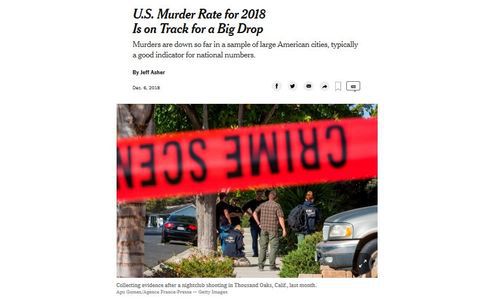 Murders are down so far in a sample of large American cities, typically a good indicator for national numbers.

The murder rate in the United States in 2018 is on track for the largest one-year drop in five years.

But based on a comparison of 2017 data and 2018 data for 66 large American cities (population over 250,000), we can observe the trend as it is occurring and offer a reasonable forecast. (The 2018 data I’ve collected is available here).

Murder rose 23 percent nationally between 2014 and 2016 before leveling off in 2017. Major increases in murder in Chicago and Baltimore received much of the national attention, but the increase occurred throughout the country.

In the cities in which data is available, murder has been down about 7 percent on average this year relative to the same point in 2017.

I.e., big cities are blacker and blacks commit the majority of murders, so trends tend to hit them harder.

… If these big cities end the year down about 7 percent from 2017, and if big cities tend to overstate the national trend by about 2.4 percentage points on average, murder should be down by around 4 percent to 5 percent nationally this year.

So far this year, murder in Chicago is down 17 percent in 2018 relative to 2017, accounting for about a third of the drop in the sample. Murder is also down substantially in cities like Baltimore; Charlotte, N.C.; Louisville, Ky.; and Memphis, which all experienced large rises in murder from 2014 to 2016/2017.

… There is still no consensus on why murder rose nationally in 2015 and 2016, though various theories have been proposed, including simple randomness. Similarly, a projected drop in murder in 2018 would not have an obvious cause.

The strongest theory, by far, is that the 23% increase in homicides during the last two years of the Obama Administration was due to the Ferguson/BLM Effect: e.g., local murder rates soared in the wake of BLM political victories, such as St. Louis in 2014 (Michael Brown), Baltimore in 2015 (Freddie Gray), and Chicago in 2016 (LaQuan McDonald).

Unlike the Obama Administration, the Trump Administration has not been on the side of BLM, so it’s hardly surprising that homicides have stopped rising.

But this turns out to be one of the few articles in the NYT that doesn’t mention the word “Trump.”