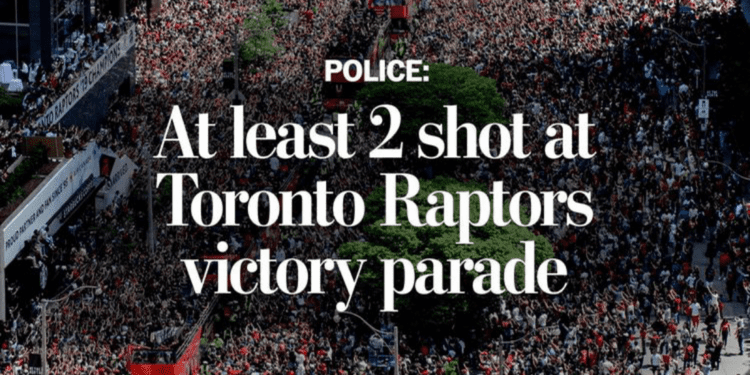 Derbyshire Rules In Toronto, And The Future Of The West

Item (10c) in my April, 2012 article The Talk: Nonblack Version read as follows:

If planning a trip to a beach or amusement park at some date, find out whether it is likely to be swamped with blacks on that date. (Neglect of that one got me the closest I have ever gotten to death by gunshot.) [More details here.]

That list has come to be referred to here and elsewhere as the "Derbyshire Rules".

Herewith one data point, from the latest Radio Derb.

Last month the Derbs spent time in Toronto, as faithfully reported in my VDARE.com monthly diary. We paused for some photo-ops at City Square.

There has since been an incident in Toronto's City Square—nothing to do with us, I hasten to assure you.

This was on Monday, June 17th. The occasion was a huge gathering, in City Square, of sports fans: precisely, basketball fans. Uh-oh.

Yes, they have basketball in Canada—who knew? Toronto's team, the Raptors, belongs to the NBA. June 13th in Oakland, California the Raptors beat the Golden State Warriors to win the NBA championship — the first win ever for a team not from the U.S.A.

This victory generated a gush of emoting from Canadian multiculturalists, notably Canadian writer of color Omer Aziz in the New York Times. The winning Raptors team were not, you see, old-line white Canadians. According to Steve Sailer, who knows his sports, they are all imports from the U.S.A., and so far as I can tell, all black. Swooned Omer Aziz, quote:

Minorities are now a majority in Toronto. In a few decades, the country itself will be majority brown. And on the streets Thursday night we saw the future of the West.

So Monday, June 17th there was a huge victory rally in Toronto's City Square—more than a million people by some reports. In line with Mr Aziz's dream come true, the celebration was gloriously multicultural, with a large black component. And then, guess what.Washington Post, June 18th, headline: Four people wounded, three arrested, in shooting at Toronto Raptors celebration.

The latest news I have, from Associated Press, June 18th, is that three people have been arrested in connection with the shootings. Their names are: Shaquille Anthony Miller, 25, Abdikarim Kerow, 18, and Thaino Toussaint, 20.

Ah yes, the future of the West