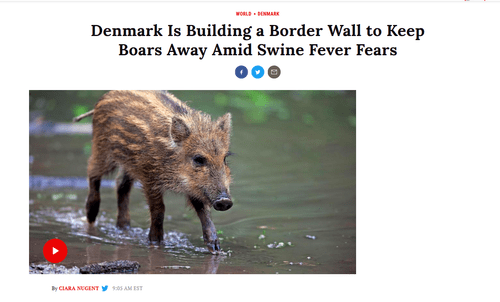 When you actually want to protect something, you build a fence. Denmark has started construction on a border fence that will protect against German boars which may spread swine flu. Denmark is heavily reliant on its pork industry.

With around 12 million pigs at any one time, swine outnumber people two to one in Denmark. Meanwhile, ASF [Asian Swine Flu] could pose a threat to the country’s $4.6 billion pork industry.

The fence will be five feet tall, designed to allow larger animals such as deer to jump over it. The government says the project, which will be completed in fall 2019 and is expected to cost $12 million, is “common sense.”

[Denmark Is Building A Border Wall To Keep Boars Away Amid Swine Fever Fears, by Ciara Nugent, Time, January 28, 2019]

Incredibly, the same kinds of objections made against this fence are made against border fences that protect against illegal immigrants and drug smugglers.

Critics say the construction of a fence is political, so that officials can be seen to be taking action, rather than a practical solution. They point to the large gaps at roads, needed for Europe's open-border Schengen area, and also to wild boar populations that live near the water - and can swim from one country to another.

Of course, as with dealing with human invaders, a border wall is not a complete solution. It is simply part of a solution.

Yet in both cases, critics seem to suggest that because there may not be a one hundred percent effective solution, nothing should be done. In that case, one might as well say one should abondon any attempt to prevent crime, terrorism, or corruption because, after all, one person might find a way to get around it.

The key issue is whether people think it is a problem or not. In this case, hopefully people can agree swine flu is a real threat. In America, we can't even get people to agree that illegal immigration is something that should be prevented.