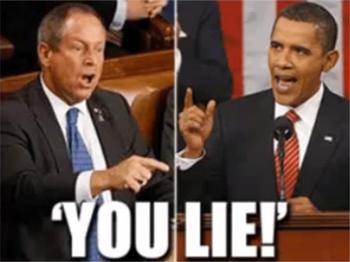 Democrats Want Illegals To Get Healthcare Under Obamacare, Because Of Course

It was only a few years ago when Congressman Joe Wilson shouted "You lie!" at President Barack Obama when he told the nation illegal immigrants would not receive healthcare under Obama's Affordable Care Act. Naturally, Wilson was absolutely right,  which could explain why the Left resorted to the usual tactic it deploys when it's losing an argument by accusing him of racism.

However, it's worth noting Nancy Pelosi and Joe Biden's exaggerated displays of disdain showed Democrats had to at least pretend Obamacare wouldn't cover illegals. And there was some regulatory trickery involved for illegals to obtain coverage.

Now however, with Obamacare safely in place, Democrats can take off the mask and tell us what we already knew. Of course, one of the purposes of Obamacare is to provide healthcare for illegal immigrants.

Clinton said she favored efforts by states such as California to extend health benefits to these immigrants.

“First of all, I want to make sure every child gets healthcare ... and I want to support states that are expanding healthcare and including undocumented children and others,” Clinton said. “I want to open up the opportunity for immigrants to be able to buy into the exchanges under the Affordable Care Act...”

In June, Gov. Jerry Brown signed a budget that for the first time funds healthcare for children in the country illegally, making California the largest state to do so. In addition, the number of counties in the state that have committed to providing low-cost, government-run medical care to such residents jumped from 11 to 48 this year.

Some California legislators have vowed to continue expanding coverage until everyone has insurance. State Sen. Ricardo Lara (D-Bell Gardens) has introduced a bill that would allow unauthorized immigrants to purchase a medical plan through the state’s Obamacare exchange and let poorer immigrants sign up for the state’s low-income health program, known as Medi-Cal.

Emergency rooms in immigrant inundated states such as California are already closing because they can't cope with the costs from treating illegals who refuse to pay. If anything, covering more illegals under Obamacare will simply exacerbate one of the most dire consequences of the Affordable Care Act—a wave of hospital closings all around the country [Obamacare blamed for killing hospitals, by Paul Bremmer, WND, December 14, 2014]

Obviously, Republicans of all stripes have defined themselves as implacable opponents of the Affordable Care Act, even if they are soft on illegal immigration. One would think this is an issue where even the likes of Marco Rubio could say something by coming out in forthright opposition to illegal immigrants receiving public healthcare benefits.

But so far, as you might expect, all we hear is the sound of silence.