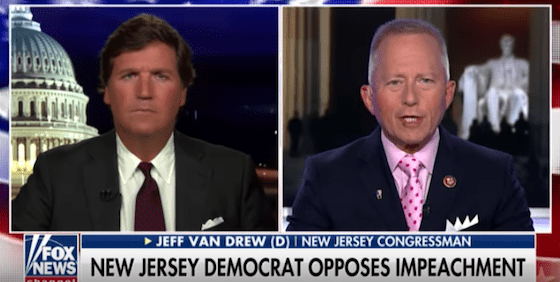 Not every Democrat supports Speaker Pelosi’s call for impeaching the president. Congressman Jeff Van Drew of New Jersey would rather work on policies that benefit the American people, like lowering prescription drug prices and rebuilding aging infrastructure. He is also a member of the Problem-Solvers Caucus which has 48 members divided equally between Democrats and Republicans that is “committed to getting to ‘yes’ on important issues.” Which is how Congress is supposed to work.

On Sunday, the congressman observed that “there is nothing that has turned up that truly is impeachable.” 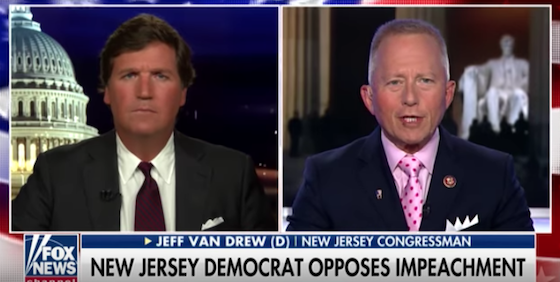 It’s nice to see that not every Democrat has fallen under the thrall of AOC and the Squad of left extremists.

TUCKER CARLSON: Well, until just the other day, Democrats appeared to be divided on the question of impeaching the President. This week, they appear to be nearly unanimous. But if you hold out, we’re warning that an impeachment push is a mistake, bad for the country and possibly kind of productive politically. One of them is Congressman Jeff Van Drew. He represents New Jersey. He is one of those holdouts, he joins us tonight. Congressman, thanks so much for coming on.

And at the end of the day, I’m afraid that all we’re going to have is a failed impeachment because folks need to understand. I mean, maybe there are those that want to punish the President or make a point and I understand that, but the bottom line is, he is still going to be the President of the United States.

And the bottom line is, he is still going to be the candidate for the Republican Party. So why don’t we let the people do the impeachment by voting in the electoral process the way that we usually do.

CARLSON: Not a popular concept in Washington. So, but I mean, I guess the political question, of course, I agree with everything that you’ve said, and I commend you for caring about those issues, because I think they are bipartisan fundamentally.

But everything you said is pretty obvious. I mean, no offense to either one of us. But you know, anyone can figure it out, including the smart people who run your party. So they know they’re not going to get a conviction, this isn’t going to work. There’s no chance of it working. So why are they doing it?

VAN DREW: I’m not sure I can answer that. I think part of it is they believe that the President should be held accountable for some things that he has done. And, you know, by all accounts, nobody ever pretended that he is perfect or there aren’t some issues.

But you know, I always use the example even during the Clinton administration, and when that impeachment, by the way, I was also not for that, and we saw that it didn’t really bear any fruit. It wasted a lot of time and money.

But it was — he had some serious issues there, and he even lost his ability to practice law. He was disbarred. But with all of that happening, it still wasn’t nearly enough for impeachment to go through.

Here is what folks have to understand. Impeachment is a very, very serious, serious move to take by any political party or political entity. You know, we have to realize that when you impeach somebody, it has to be for really strong reasons, because you are also, you know, removing the power of the people, you’re disenfranchising their vote.

Whether we like it or not, whether we like who won or not, you’re disenfranchising their vote. And it has to be serious to do that.

So my worries are getting stuff done. I really want to do good things, and I want to do it in a bipartisan way. I really want to see the country move forward. I really know that you know, this — and abroad, I think that people could look at this and think that our country is disorganized and in turmoil and that we’re split apart. And I think it’ll split people in society apart.

I think folks in literally, in the United States of America are even going to get angrier at each other. I don’t believe it’s going to bring people together. And that’s what we need to do.

And then we have the election. And the other issue, by the way is these are the midterm elections that are going to be going on now. And then we’re rolling right into the full elections for President and Congress, et cetera and I don’t know that we need to have all of this going on at the same time.

CARLSON: I have to agree with that. And again, as you just pointed out, voters get to render a judgment in a little over a year, you know, we are going to have that.

CARLSON: Congressman, thanks so much for joining us tonight. I really appreciate it.

VAN DREW: It was great to be here. Thank you.