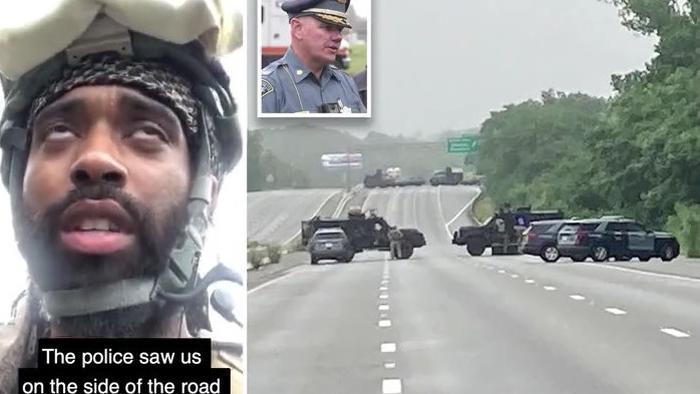 “Defendants”, “Men”, “Rhode Island Group,” “11,” And Other Curious Headline Words For Violent Black Nationalists Who Shut Down I-95

A violent, armed and ready-for-race-war black militia called Rise of the Moors got into a standoff with Massachusetts police the other day, but it would be hard to tell from scanning the headlines.

The standoff between Mass. Police and people who appear to be members of The Rise of The Moors started at 1:30am this morning and ended in 11 arrests https://t.co/Tmy7BoM8Ni

The 'Rise of the Moors' guys pull over on I-95 to refuel their own vehicles. People notice. 'You can imagine 11 armed individuals standing with long guns slung on an interstate highway at 2 in the morning certainly raises concerns.' https://t.co/GSeM1svwL4

The Boston Globe has them as “R.I. Group”

A group that calls itself the “Rise of the Moors” broadcasted live Saturday on social media channels during a standoff with police on Interstate 95 in Wakefield. https://t.co/HVUklWGoyo

Finally, this person is under the impression that the "Moors" were white, because presumably,  if they were black, the news media would have said so:

Militia activity is hard to prosecute since it's generally legal to 1) own firearms and dress up in fatigues 2) be a member of radical group and 3) hang out together shooting and being radical, but Rhode Island does prohibit paramilitary training where the intended result is "civil disorder."

And I guess if you're blocking the highway with the flag of Morocco, that's pretty disorderly.

Has anyone asked Jen Psaki about the Rise of the Moors?