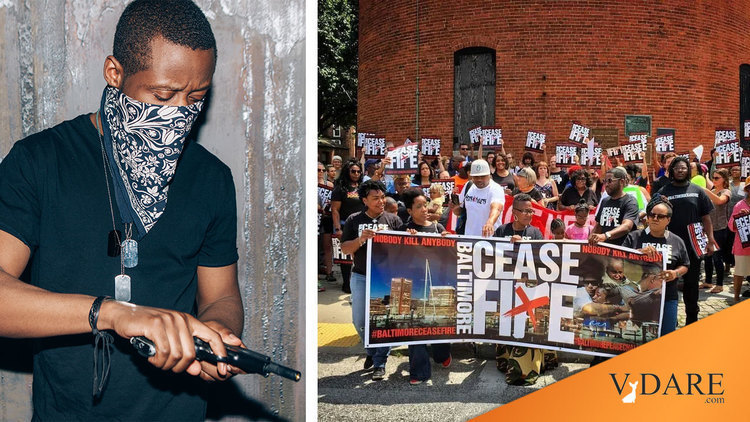 So what happens when violence outreach workers get murdered before they get the chance to interrupt violence in a more than 60 percent black city?

Just another day in Baltimore.

A Baltimore-based outreach worker with the Catholic anti-violence group Safe Streets Cherry Hill was shot and killed in the city on Thursday.

“Safe Streets has a special place in my heart, and I consider the Violence Interrupters who bravely serve this program as a part of my family,” Baltimore Mayor Brandon Scott said in a Thursday statement posted to Twitter. “Tonight, our brother Kenyell Wilson became a victim of the gun violence he worked every day to prevent. I am deeply saddened and angered that ‘Benny’s’ life was taken in a weak cowardly act.”

Officers on Thursday responded to reports that Kenyell “Benny” Wilson, father to 11 children, had walked into Harbor Hospital on Thursday seeking treatment for gunshot wounds, The Baltimore Police Department confirmed to Fox News.

Baltimore anti-violence outreach worker, father of 11 shot and killed while getting foodhttps://t.co/3POYgGX0Rm

Wilson, 44, drove himself to the hospital after being shot but ultimately succumbed to his wounds, police said.

Scott asked the community to keep Wilson and his family in their prayers.

Wilson’s friends told Paul Gessler, a reporter for WJZ, a Baltimore CBS station, that Wilson had been “grabbing food” when he was shot.

Wilson had been an outreach worker for the program for about nine years, according to the outlet.

Winne McCray, the CEO of FHCB Health System — a health services provider in Baltimore that worked with Safe Streets —described Wilson as a “valued member” of the program in a Friday Facebook post. She added that FHCB had “the pleasure of celebrating for his commitment to preventing violence” in the Baltimore community “just a week ago.”

“…The loss of Mr. Wilson is a devastating blow to each of us,” McCray wrote. “While we uplift Mr. Wilson’s positive presence in our community and the impactful work he did every day I can’t help but think about his family and their pain. Our hearts and prayers go out to Mr. Wilson’s Family, his Safe Streets Family, and his friends during this extremely difficult time.”

FHCB will “never forget” Wilson’s “dedication, courage and devotion to his work and community,” McCray added.

Safe Streets outreach workers mediate disputes in an effort to prevent violence. They also lead public education campaigns and work closely with faith-based organizers and community members, but not with the police, to steer young people away from violence.

Homicide detectives are investigating Wilson’s death but have so far been unable to determine where he was shot. Moses said Wilson was shot in his vehicle on Thursday, according to WJZ.

Authorities are asking anyone with information about the shooting to call detectives at (410) 396-2100, or anonymously through Metro Crime Stoppers at 1-866-7lockup.

But how can you blame this on white people?

If you want a look at what defunding the police looks like, just take a peek at life in a city losing its white population: Baltimore.