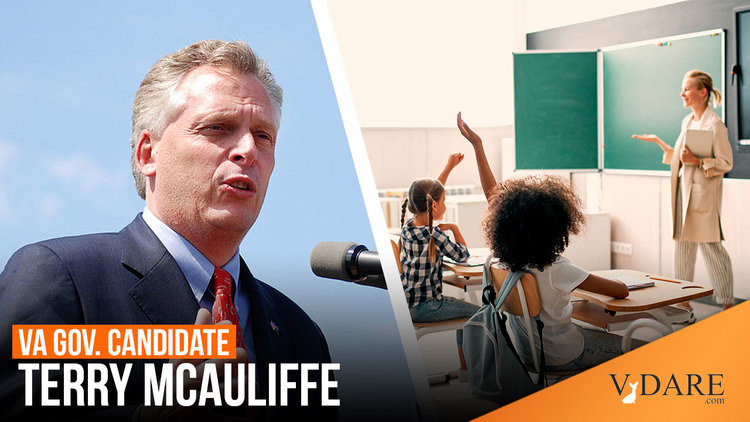 Remember, the elite in charge of all of America applies this logic to every aspect of life in this nation.

Democrat candidate in Va. governor’s race argues too many teachers in state are white, by Alec Schemmel, Fox17.com, November 1, 2021

WASHINGTON (TND) — Democratic candidate for Virginia governor, Terry McAuliffe, argued at a rally Sunday that too many of Virginia’s teachers are white, citing the state’s proportion of students of color to white teachers.

“I promise you we’ve gotta diversify our teacher base here in Virginia,” McAuliffe said during a rally Sunday ahead of the hotly contested election on Tuesday. “Fifty percent of the students in Virginia schools K-12 — 50% are students of color and yet 80% of the teachers are white.”

McAuliffe told the crowd at his rally that “we all know what we have to do in a school to make everybody feel comfortable in school.”

“So, let’s diversify!” he proclaimed.

McAuliffe asserted on NBC’s Meet the Press Sunday, that his Republican opponent Glenn Youngkin was supposedly attempting to get certain books removed from Virginia schools because they were authored by Black people — a claim that Washington Post fact-checkers later declared false.

“He is closing his campaign on banning books,” McAuliffe said on Meet the Press, two days before Virginia’s hotly contested gubernatorial election. “He wants to ban Toni Morrison’s book ‘Beloved’ he’s going after one of the most preeminent African American female writers in American history, won the Nobel Prize, has a Presidential Medal of Freedom, and he wants her books banned. Now, of all the hundreds of books you could look at, why did you pick the one Black female author? Why did you do it?”

McAuliffe told Meet the Press that his opponent, Youngkin, was “ending his campaign on a racist dog whistle, just like he started the campaign when he talks about election integrity.” [More]