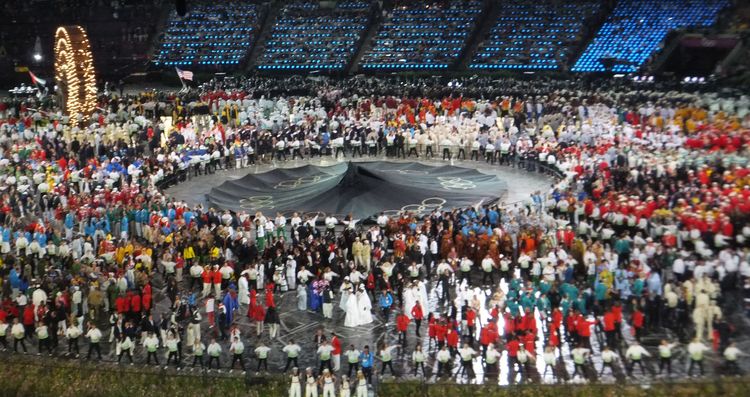 Danny Boyle's Olympics: A Multicultural "Triumph Of The Will"

I have to agree with British Tory MP Aidan Burley that Friday night's Olympics opening ceremony was "leftie multicultural c***."  Here are names and backgrounds of the nine people who carried out the flag-bearing ceremony.

Daniel Barenboim, male, Israeli:  an old-line leftist Israeli, of a type once common but made almost extinct by the perpetual, institutionalized Jew-hatred of the Muslim world.

The Toronto Globe and Mail ran a poignant piece about the previous London Olympics, in 1948.

That was the 1948 Olympics, famous as the “austerity games” in a far more debt-burdened Britain than 2012.

"More debt-burdened" Britain may have been in 1948, but it was still a nation, not merely a place.

While nobody wants to return to those difficult postwar years . . .

Hey, who are you calling "nobody"?

. . . when food rationing was rife and bomb craters pocked London, there is a lot of nostalgia among the ‘48 generation for the simpler, more intimate Olympics.

We don't do simple and intimate any more: not when there are boxcar-loads of public money to be spent, the vanity of politicians to be gratified, the egos of globalist bureaucrats to be massaged, leftist activists to be honored, and the degraded sensibilities of several billion mass-entertainment-stupefied couch potatoes to be fed.

Britain’s government couldn’t afford even a low-key Olympics, so relied on amateur athletic associations and ticket sales to finance almost the entire budget of £600,000 (equivalent to about $30-million today ? compared to the $14.5-billion cost of the current Olympics). Those Games came in slightly under budget, and sold enough tickets to turn a profit of £10,000.

I'll say this, though: If Danny Boyle, who directed the opening ceremony, ever finds himself unemployed in the West, the North Koreans have work for him.