Daniel Kaluuya And GET OUT: Everybody Hates Samuel L. Jackson for Being Pro-African-AMERICAN Rather Than Just Anti-white

A spat has broken out over the hit anti-white horror movie Get Out, which I reviewed in Taki’s Magazine. From the NYT:

‘Get Out’ Star Responds to Samuel L. Jackson’s Race Comments

Black, British and Defending His Role:

Jordan Peele hit box office gold with his film “Get Out,” but his British lead actor, Daniel Kaluuya, has had to defend his casting after it was challenged by Samuel L. Jackson.

LONDON — Daniel Kaluuya, the star of the satirical horror movie “Get Out,” this week countered Samuel L. Jackson’s comments that he would have preferred to see a black American actor in the movie’s lead role.

“I tend to wonder what that movie would have been with an American brother who really feels that,” he said. “Daniel [Kaluuya, who stars in "Get Out" as an African-American photographer] grew up in a country where they’ve been interracial dating for 100 years. What would a brother from America have made of that role? Some things are universal but [not everything is].”

Kaluuya is a creepy-looking Eastern African (his parents were from Uganda), and he hasn’t shown much personality in either of the two movies I’ve seen in him. Everybody who likes Get Out liked Kaluuya’s fat friend, played by the African-American comedian Lil Rel Howery, better than they liked him.

This is not to say that Kaluuya and his witch-doctor looks were miscast. Get Out is an effective film and writer-director Jordan Peele is a bright guy, so he likely knew what he was doing in casting Kaluuya, although the reasons for Peele’s decision are likely unmentionable.

Looking at Samuel L. Jackson’s enormous list of 172 movie and TV credits on IMDB, with just under $5 billion in box office, it took even Jackson, a guy seemingly born to be a movie actor, a long time to work his way up. I was vaguely aware of him in the late 1980s, but I don’t recall him making a big splash until, maybe, Spike Lee’s Mo Better Blues in 1990, and, definitely, Jungle Fever in 1991, which was his 25th credit. (He played a crack addict in Jungle Fever immediately after getting out of rehab, so perhaps heroin and cocaine were what had been holding him back?)

Jackson became a legend in 1994′s Pulp Fiction, his 47th credit, when he was 45 years old. Presumably, Jackson, a Chattanooga-raised graduate of the HBCU Morehouse College, feels a fair amount of solidarity with other African-American actors (just not enough for the workaholic Jackson to pass up a role for a brother). 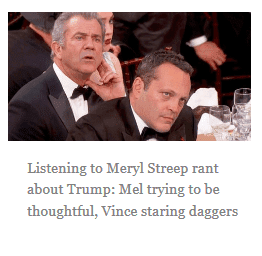 Jackson’s notion that Americans would, on the whole, be better at playing Americans than British Commonwealthers are was illustrated in Mel Gibson’s recent U.S. Army movie Hacksaw Ridge. Gibson has very good reasons to shoot his film away from Hollywood in Australia with a mostly British or Australian white cast. Nonetheless, despite the competence of the actors at impersonating Americans, the one American in the cast, Vince Vaughn, stood out.

“Get Out” stars Mr. Kaluuya, who is black and British, as a young African-American man who visits his girlfriend’s family and quickly discovers that their antipathy toward black people extends beyond subtle jabs. “I love all my black brothers and sisters worldwide, and that’s my position,” Mr. Kaluuya told the BBC in an interview, which was partially published online on Tuesday.

The point is to be Anti-White. Squabbling over which nationality you are distracts from the important issue: Anti-Whiteness.

“I’ve lost out on a lot of roles because I’m black,” he added.

So you are the Real Victim.

In an interview with GQ that was published online on Monday, Mr. Kaluuya praised Mr. Jackson — “he has done a lot so that we can do what we can do” — but found fault with his critique. “When I’m around black people I’m made to feel ‘other’ because I’m dark-skinned,” Mr. Kaluuya said. “I’ve had to wrestle with that, with people going ‘You’re too black.’”

“Then I come to America and they say, ‘You’re not black enough,’” he continued. “I go to Uganda, I can’t speak the language. In India, I’m black. In the black community, I’m dark-skinned. In America, I’m British. Bro!” …

With his comments, Mr. Jackson stepped into a growing debate in Britain about the lack of opportunities for minority actors in British movies and television. Prominent British actors including Naomie Harris, Idris Elba and David Oyelowo have all publicly addressed the issue.

Who can forget the recent Guardian headline: “Riz Ahmed Warns Lack of Diversity on TV Will Drive Young to ISIS”?

In his interview with GQ, Mr. Kaluuya seemed to rebut Mr. Jackson’s comments about the black experience in Britain being less fraught than that in the United States. “Police would round up all these black people, get them in the back of a van, and wrap them in blankets so their bruises wouldn’t show when they beat them,” he said, citing riots in London that have pitted black citizens against the police.

The Great Undocumented Shopping Epidemic of 2011.

“It’s not in the mainstream media. Those stories aren’t out there like that,” he said, adding, “I just want to tell black stories.”

Over the weekend, the writer and director of “Get Out,” Jordan Peele, made history as the first black moviemaker to earn $100 million with a debut film. “Get Out” will be released in the United Kingdom on Friday.