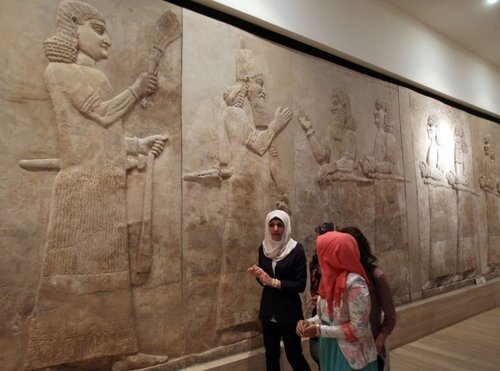 Cuneiform Commerce—Middle East Antiquities Are Safer In The West

Two weeks ago, following the capture by ISIS of the ancient Syrian city of Palmyra, there was some fuss about ISIS destroying the precious antiquities of the place.

Radio Derb had words to say about that.

Cast your mind back to the spring of 2003, when U.S. troops had just entered Iraq. On April 13th that year the New York Times ran a story on the looting of the Iraqi National Museum. A hundred and seventy thousand items had been carried away from the museum by looters in the previous three days, said the Times.

Well, I wrote a column about that, arguing that this looting was a jolly good thing. It wasn’t very likely, I wrote, that these looters wanted a Sumerian vase to put on their chest of drawers. What they wanted was the money that a Sumerian vase fetches on the international antiquities market, which is a lot of money to a museum clerk in Baghdad. So most of those looted objects would end up in the West, in the homes of collectors or in institutions; and they’d be much safer there than in a place like Baghdad.

“At any point in history, some parts of the world are civilized, and some are sunk in barbarism. The civilized part of the world at present is what we call the West — a term not to be taken with strict geographical seriousness, as it includes places like Japan and Australia. The Arab countries, including Iraq, belong to the sphere of barbarism, subject to unpredictable spasms of war, revolution, and chaos. In the present age, priceless artefacts from mankind’s history should be kept in the West as far as possible. This gives them their best chance of surviving for another century or two.”

End quote. That column of mine was greeted with squeals of outrage from all over. Surely, people said, surely I wasn’t suggesting that some nations are better able to preserve priceless antiquities than other nations?

Wasn’t that demeaning to the Iraqis, saying “Hey, you people are so hopeless you can’t be trusted with your own antiquities”? Wasn’t it like saying — oh my God! — that some nations are more civilized than other nations?

Yes, of course, lots of people do. The great fantasy of our age is that in the human world, everything is equal to everything else. I don’t subscribe to that fantasy, though. I was right about the Iraqi National Museum twelve years ago, and I’m still right about it. That’s why I’m crowing. I’d ululate if I could, but I don’t know how.

So can we kiss Palmyra’s antiquities goodbye? Not necessarily. ISIS operations have to be financed somehow, and they don’t seem to be issuing bonds, running mail-order marketing campaigns, or opening call centers.

I’m hoping that after a symbolic bulldozing of some of those old temples, the ISIS guys now in occupation of Palmyra will gather up what portable antiquities they can find, get in touch with the appropriate middle-men, and sell them off to collectors in the civilized world. It’s the best thing that could happen.  [Radio Derb, May 23rd, 2015.]

To judge from a Washington Post report this Monday, Radio Derb’s hopes are being fulfilled.

Islamic State militants have provoked a global outcry by attacking ancient monuments with jackhammers and bulldozers. But they also have been quietly selling off smaller antiquities from Iraq and Syria, earning millions of dollars in an increasingly organized pillaging of national treasures, according to officials and experts …

The group’s looting has become so systematic that the Islamic State has incorporated the practice into the structure of its self-declared caliphate, granting licenses for digging at historic sites through a department of “precious resources” …

“They steal everything that they can sell, and what they can’t sell, they destroy,” said Qais Hussein Rasheed, Iraq’s deputy minister for antiquities and heritage.  “We have noticed that the smuggling of antiquities has greatly increased since last June,” he added, referring to the month in which Islamic State militants took control of Mosul and large parts of northern Iraq. [Islamic State isn’t just destroying ancient artifacts — it’s selling them, by Loveday Morris; Washington Post, June 8th 2015. ]

As I said back in 2003, to much squealing and swooning by goodthinkful commentators, this looting is the best thing that could happen to the antiquities and those who care about them.

These priceless objects will now end up in civilized countries, where they can be properly cared for, instead of languishing in unstable, disorderly countries like Syria and Iraq, where their chances of surviving another 3,000 years are much smaller.

So if you’re collecting Sumerian figurines or building up a library of cuneiform texts, get in touch with your broker.  Prices should be optimal for a while.