CultMarxipedia: Wikipedia Has No Category For "Racially Motivated Violence Against European Americans" 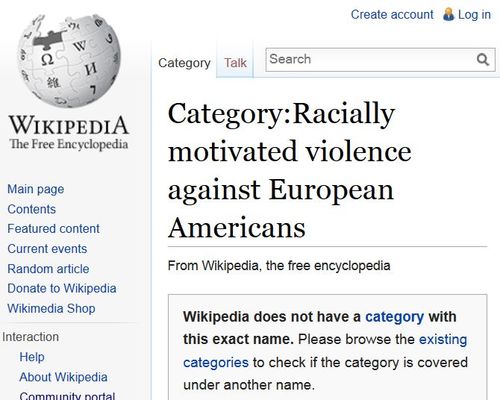 Just a short follow-up to my recent post about the Wichita Horror.

Researching the details there, I noticed that Wikipedia has a handy page listing crimes of violence by nonblacks against blacks, headed: Category: Racially motivated violence against African Americans. James Byrd is there, the guy who got dragged to death in 1998, and there are a couple more less well-known black victims from recent years, like James Craig Anderson, killed in 2011, but the overwhelming majority of the 90 cases listed by Wikipedia are from fifty years or more ago, confirming my impression that violent crimes by nonblacks against blacks have been exceedingly rare for decades now.

Curious to see how Wikipedia records the other side of the issue, I tried to find their page headed Category: Racially motivated violence against European Americans. Strange to report, they seem not to have one. I tried replacing "European" by "White," "Caucasian," and "Nonblack," but no dice.

The Cultural Marxist encyclopedia does have a page headed Category: Racially motivated violence in the United States. Its list of 43 items includes one each for: the 2003 Beat Up A White Kid Day in Ohio, the Reginald Denny beating during the 1992 L.A. race riot, the 1993 Long Island Railroad massacre, the 2005 Brooklyn assaults by black teenage girls on white ones, the black inmate who killed Jeffrey Dahmer the white cannibal in 1994, and the Zebra killings of the early 1970s, when four blacks hunted and killed a dozen or so whites in San Francisco.

Just taking black-on-nonblack killings for the past twenty years, and leaving out the jail inmate killing, that's a total of … zero, according to Wikipedia. So no black killed a nonblack in the U.S.A. this past 20 years with racial hostility in his mind. I'm sorry, but I find that really hard to believe.

The Wichita massacre isn't listed. Neither is the 2008 murder of Marine Corps Sergeant Jan Pietrzak and his wife in Winchester, California. Pietrzak was white, his wife Quiana was black. They were murdered in their own home by four black Marines — following rape and torture, of course. Local law enforcement hastened to assure everyone that there was no racial motive, only robbery.

If it was a robbery, why didn't they come when nobody was home instead of in the dead of night — armed to the teeth?

Why did this happen? What motivated them? What was it about my son and daughter-in-law that inspired such hatred and loathing?

End quote. It's really hard to figure, isn't it?

Obama did not favor Mrs. Pietrzak with a reply. Why should he have? She's obviously just another racist cracker.

(I should say that Wikipedia does have a page on the Pietrzak killings, they just don't consider it racially motivated. They also make the page hard to find. If you put "pietrzak" in the Wikipedia search box, six names show up, but none of them is Sergeant Pietrzak. If you put "byrd" into the box, 35 names show up, incuding James Byrd the dragging victim. If you put in "martin" and go to the Names page, you see Trayvon Martin in the "Born since 1950" category. Ah, Wikipedia.)

So: A nonblack kills a black in self-defense — TV news people will doctor the 911 tapes to make it sound racial. Blacks kill nonblacks — nothing to see here.