Russians Rally For National Unity (And AGAINST Muslim Immigration)

Russia is an interesting place to watch regarding immigration diversity, because the Russian people seem less inclined to embrace the lunacy of political correctness. They believe that their government should respond to the needs of the Russian citizens, not put out the welcome mat for unfriendly Muslims who want to claim the territory for Allah, a sentiment that showed up in a recent rally.

Below, demonstrators carry a banner reading “Today a Mosque – Tomorrow Jihad” and showing a mosque image with a line through it in a march to mark National Unity Day, in Moscow on November 4. (The mayor of Moscow decreed in March that no more mosques would be built in the city.) 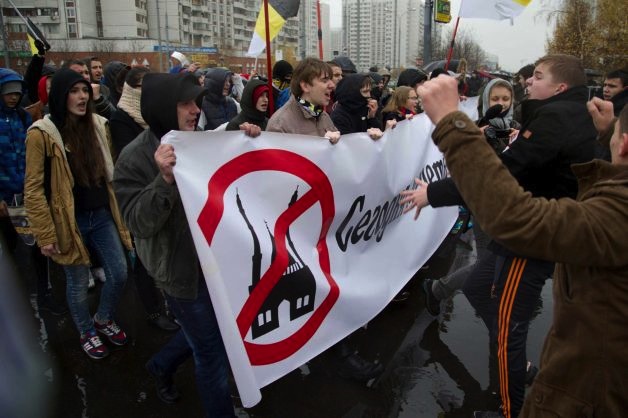 It’s likely the recent murder of an ethnic Russian man by a Muslim was strong in the minds of demonstrators. A TV news report noted at the time that “An uncontrolled flow of illegal migrants has turned the neighborhood into a crime center.”

Interestingly, Russians are the top percentage of people who think their country has too many immigrants, according to a 2011 IPSOS poll. 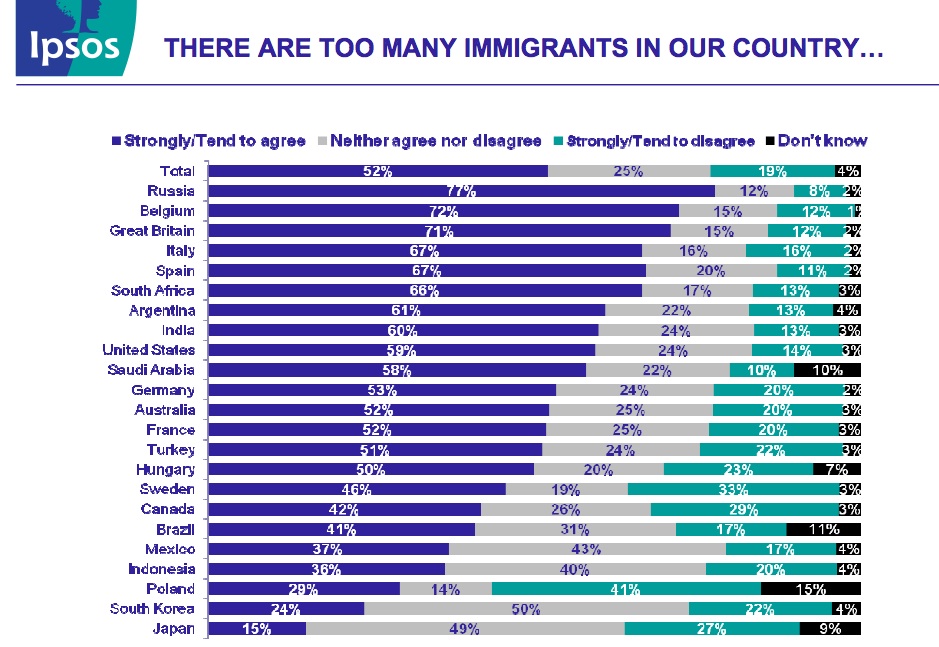 And why wouldn’t Russians dislike the Muslim influx? On Islamic holidays Muslims in the hundreds of thousands take over the streets of Moscow to worship Allah and mark territory. In 2002, 40-50 armed Chechen separatists took over a Moscow theater in a siege in which about 130 hostages died. In 2004, another group of Chechens took over a school in Beslan where at least 334 hostages were killed including 186 children.

And in daily life, Muslims have not been good neighbors, sometimes behaving as if they aimed to impose sharia. A young Russian woman explained her fears about pushy Muslims to a CBN reporter: “I am scared. They come into our neighborhood and begin to tell us things we can and cannot do. We like to walk our dogs here and have outdoor barbecues, but the Muslims can say you cannot cook pork or walk your dog around here.”

Here’s more about Monday’s demonstration. Media reports routinely characterize the participants as being “right wing” without explaining the reasons for the anger. Some rough characters show up at such events to be sure, but their opposition to immigration chaos is a widely held view, as shown by polling.

MOSCOW – Thousands of Russian nationalists rallied across the country on National Unity Day on Monday, in a sign of the growing strength of far-right political forces galvanized by an anti-immigrant agenda.

Hard-line nationalists have adopted the holiday, which commemorates the liberation of Moscow from Polish invaders in 1612, as an occasion to hold annual “Russian Marches”.

This year’s rallies were larger and more numerous than in previous years, in a headache for Russian authorities who worry that rising ethnic tensions pose a threat to public order.

At the largest rally, around 8,000 people assembled in an working-class neighborhood on the outskirts of Moscow, police said. Organizers’ requests to hold the rally closer to the city center have repeatedly been denied.

“Moscow has only just woken up, and Russians have only just started to recognize their identity,” said Alexander Belov, a nationalist leader and an organizer of the march. “With every day Russian nationalists are gaining more and more support across the country.”

Police said they detained around 30 marchers for wearing masks or forbidden Nazi symbols, and for other minor public order offences. No serious disturbances were reported.

Smaller demonstrations, attracting hundreds or dozens of participants, were held in towns and cities across Russia.

Although nationalist organizations attract the active support of only a small minority of Russians, they tap into widespread public concerns over immigration and disenchantment among Russian youths.

Many ordinary Russians are deeply hostile to immigrants from the largely Muslim regions of Central Asia and the Caucasus, blaming them for problems such as crime and unemployment.

A recent survey by the Levada Center polling agency, taken on the eve of Moscow’s mayoral election in September, showed that immigration topped voters’ concerns. More than half of respondents said it worried them more than any other problem.

BACK TO THE TSARS
President Vladimir Putin first established National Unity Day in 2005 to replace the Soviet-era commemoration of the Bolshevik revolution and boost national pride with a reminder of a glorious event in Russian history.

“Equally today, the consolidation of society behind our development goals is key to our successful way forward.”

This year’s marches come at a particularly sensitive time, less than a month after thousands of youths rioted in a working-class Moscow suburb, Biryulyovo, following the killing of a young ethnic Russian man.

Police later arrested a citizen from the mostly Muslim country of Azerbaijan for the murder.

Maria, a 15-year-old schoolgirl with dyed red hair, said that she attended Monday’s Moscow march – her first – because of the incident.

“After what happened in Biryulyovo I couldn’t not take part. I want to live in a country where immigrants act like guests, not where they own the place,” she said, declining to give her last name.

Many of those marching in Moscow waved black, yellow and white flags, the old monarchist flag of the Romanov dynasty that has in recent years been adopted as a nationalist symbol.

Others carried religious icons, or pictures of the last Romanov Tsar Nicholas II and his family, executed by Bolshevik revolutionaries in 1918. Many marchers carried banners with slogans like “White Power” and “Russia for the Russians”.

“We should stop immigrants from coming into Moscow. Give them land so that they live like monkeys, like the Americans did with the Indians,” said demonstrator Alexei Shukin, 49, wearing camouflage fatigues.

As the head of a patchwork state with multiple religions and ethnicities, Putin can ill afford any escalation in racial tensions and has repeatedly called for tolerance.

However, in a bid to head off the nationalists’ rising appeal and mobilize public support behind the government, Russian authorities have at the same time adopted elements of the nationalist agenda.

For example, the federal and regional governments have recently cracked down on the use of illegal immigrant labour, notably in construction and outdoor markets.

But such concerns were little in evidence at Monday’s Moscow rally, where participants said authorities were doing too little to clamp down on illegal immigration.

“The only way the current authorities, who make money off illegal immigrants, will listen to us is if we move onto the streets,” said demonstrator Shukin.