In San Francisco, the city’s public transportation system is doing an upbeat rollout of a new layout for trains where seats are being removed so more people can be crammed by standing. 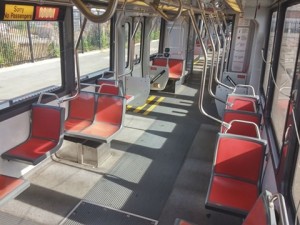 Nobody mentions the cause of increased crowding but it must be at least somewhat due to the city’s booming tech economy, which of course has its downsides.

Ruling elites want us little citizens to forget that California used to be paradise for regular people, before it was ruined by crazy diverse growth.

Crowdifornia! Hey let’s bring in a hundred million more immigrants to screw it up completely.

On Wednesday morning, a very different train car was put into service on the N-Judah line. Its 14 double-wide seats were replaced with seven single seats. It’s certain the change did not go unnoticed.

“Normally on the aisle of the light-rail vehicle it allows for two rows of people, and no one can get in between them,” said Supervisor Scott Wiener, who that morning boarded the re-configured car at Ninth and Irving streets. “Now you have people holding on to the handrail and an entire row of people could file in between them. To me it seems positive.”

The idea, which Wiener first pushed for in 2011, is that two more people can fit aboard a train for every seat that’s removed. In this case, the change adds space for 10 more riders.

The single car with reconfigured seats is being deployed as part of a pilot program the San Francisco Municipal Transportation Agency is using to gather rider feedback.

Riders on the N-Judah can look for the train car through May 29. After that, it will be put on the L-Taraval line until June 13. It is primarily used during morning and evening commute hours.

Based on feedback, more cars could be reconfigured.

It costs $30,000 per vehicle to replace double seats with single ones and add new stanchions.

Besides increasing capacity, the reconfigured car is expected to improve Muni’s on-time performance because people can get in and out more quickly, SFMTA Transit Director John Haley said.

“The problem now in the short term that we’re trying to solve with the light-rail vehicles is the capacity,” he said.

The SFMTA is also pursuing up to 260 new light-rail vehicles to replace the nearly 150 cars that were purchased 15 years ago.

Riders’ main issues with Muni are overcrowding and reliability, and the pilot program is “kind of a cheap proposal” as the transit agency tries to persuade voters to pass two bond measures in November that would bring in $1.5 billion over 15 years, said Mario Tanev, a spokesman for the San Francisco Transit Riders Union.

“Without additional funding, [reconfiguring cars] is pretty much the only thing that SFMTA could try to provide more space,” Tanev said.

The seat reconfiguration does not affect areas prioritized for disabled and elderly people.

Supervisor London Breed, who joined Wiener’s efforts, also rode the pilot car and was pleased to see all passengers on her stops able to board and no one left behind, as often happens during the morning commute.

“It’s kind of second nature now so I don’t think people are opposed to it,” she said of not having a seat. “It’s more important they are able to get in than have a seat.”