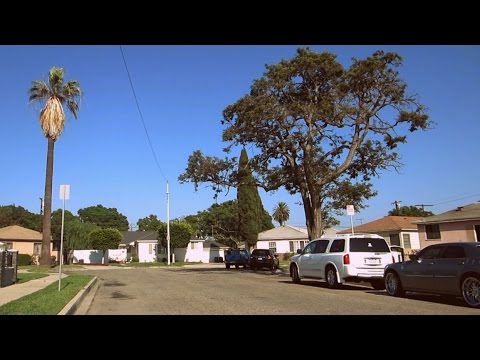 The Suburban California Dream in Compton—And What Killed It

A picture of real-life Compton

With the Los Angeles suburb of Compton back in the news due to the hit biopic “Straight Outta Compton” about the 1980s gangsta rap group N.W.A., it’s worth noting that Compton has a pretty interesting real estate history. In the 1950s and 1960s, Compton represented the black version of what Kevin Starr and Benjamin Schwarz call “the California Dream” of pleasant lower middle class life for the masses.

With Ta-Nehisi Coates popularizing the genre of real estate histories, lets look at a less tendentious academic work covering Compton, the U. of California Press book, L.A. City Limits: African American Los Angeles from the Great Depression to the Present by historian Josh Sides, director of the Center for Southern California Studies at Cal State Northridge in the San Fernando Valley.

One of Los Angeles’ older independent suburbs, conveniently located a little over halfway from downtown L.A. to the L.A. / Long Beach Harbor, Compton started out pretty much all-white until the courts banned restrictive covenants in 1948.

Compton offered its predominantly blue-collar residents affordable suburban homes in the heart of a thriving industrial area. … During the 1940s, Compton eagerly annexed almost fifteen hundred acres, hoping that added resident and industrial growth would contribute to the city’s already substantial tax base. This tax base allowed the city to develop a strong public educational system …

As late as 1948, fewer than fifty African Americans lived in among Compton’s forty-five thousand residents. … Yet during the 1950s, Compton underwent the most profound racial change of any city in Southern California. Responding to the great demand for African American housing outside the ghetto, a new group of tract home developers and real estate brokers found a niche in the unrestricted housing market. … This undeveloped property became a fertile area for the growth of the city’s black population. Davenport builders, a large developer, quickly built unrestricted tract homes on the western edge of Compton. … This was one of the few places in Los Angeles County where blacks could buy new tract housing. … “For once, the Negro did not move into slums; for once he came into good housing.” Indeed, the 1960 census revealed that 93 percent of blacks in Compton lived in homes built since 1940, with more than half residing in homes built since 1950. Compton’s houses were also large: almost 75 percent of black households in Compton had four to five rooms.

Keep in mind that “large” by postwar L.A. County standards is not large by 21st Century national standards. A sizable fraction of the housing in L.A. County was built during the egalitarian decades after Pearl Harbor when the emphasis was on quickly and cheaply providing single family homes for the huge growth in population that got into high gear during the War. These days it’s easy to think that back then they should have known how much the land would eventually be worth and thus build on a more sumptuous scale, as some pre-1929 stock market crash communities like Pasadena and Hancock Park were laid out with ample amenities.

But the emphasis after the extreme overcrowding in SoCal during WWII was on building fast and cheap. This was most vividly conveyed to me by a 1946 Robert A. Heinlein non-sci-fi short story about local Southern California politics called “A Bathroom of Her Own.” In it, an experienced political staffer (i.e., RAH) teams up with a talented female political novice (presumably, the 3rd Mrs. Heinlein) to get her elected on a platform of getting houses built fast for the returning troops. Her motivation is that she’s been bunking with her relatives throughout the War, and now after a half-decade, she wants a bathroom of her own, and thinks others should have some privacy and space too.

My parents bought their first house in 1946, a duplex in Sun Valley near Lockheed. My impression is that they didn’t make any money on their investment when they sold it five years later because the supply of housing was so much larger by 1951 than it had been 1946.

Compton was not part of the Watts’ riot of 1965. Sides continues:

… Despite the persistence of racism in Compton, African Americans truly benefited from their suburban relocation. Indeed, the much vaunted suburban dream of peace comfort came true for the thousands of blue-collar African-Americans who moved ot Compton during the 1950s. When white novelist and journalist Richard Elman visited Compton in the 1960s, he was amazed by this new black suburbia:

… Here, it seems, a man has a chance to find decent housing and educate his children. Here it is possible to  enjoy the great lower middle class dream of private life without feeling as if one were in a private hell.

Furthermore, Elman observed, Compton’s superior racially integrated schools created a much better crop of blacks students that could be found in the ghettos of Watts or South Central: “Compton has become a city which sends its Negro high-school graduates to state colleges, to Berkeley and UCLA, and some even can afford to go as far away as Fisk.” Locally, black families increasingly sent their children to Compton Community College, considered at the time to be one of the state’s best community colleges.

As in West Adams, African Americans in Compton perceived themselves(and were perceived by others) as middle class. Elman noticed that in Compton, “people never tire of telling you: “We’re different here than in Watts.’” And they certainly were. … While unemployment passed 30 percent in Watts, it stood at 8.7 percent in Compton. Compared to Watts, a much higher proportion of men and women in Compton worked as full-time factory operatives. …

For Compton’s residents, the city was far from the ghetto. …

In contrast to the physical deterioration of Watts, Compton’s proud black homeowners had meticulously groomed gardens and, for the most part, well-maintained housing.