Crime Victims Get a Hearing

Greeley, Colorado, would have been an interesting place to be on Tuesday, since it was the site of a community forum focused on the crime victims of illegal aliens. One citizen who told her story was mother Sandy Ross, who lost her home and job because of a drunk-driving foreigner.

"None of this would have happened if this person had been taken off the street," she said in a videotaped message. 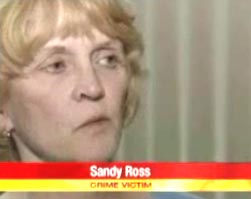 Only a few hundred people were expected at the meeting, but close to a thousand turned out to hear more about how illegal immigrants who commit crimes are impacting the community.

"We may not have 10,000 illegal immigrants committing crimes in Weld County, we may just have a couple hundred, but each one of them impacts someone in a significant way and we want to make sure we help these folks," said [Weld County DA Ken] Buck.

Like Sandy Ross, for example, who was one of several victims who shared her story. Two years ago she and her 4-year old son were hit head on by a career criminal who was drunk and in this country illegally. "I was more upset that he was driving under the influence, that his license had been suspended, that he had stolen someone's car and that he had priors. He should have been deported the first or second time this happened," said Ross. [DA rails against illegal immigrants at community meeting KWGN-TV 9/19/07]

Congratulations to District Attorney Ken Buck for shining a light on forgotten Americans who have been harmed or lost a family member as a result of the criminal activities of illegal aliens. He has had to deal with plenty of noisy open-borders supporters who got lots of press coverage prior to the event.

There are more details about what happened to Sandy Ross in a Denver Post article, Immigration Strains Greeley:

Sandy Ross, 55, is among a group of people who will talk about how crimes committed by illegal immigrants have damaged their lives.

Ross said she was driving home from church in Weld County on Sept. 2, 2005, when a car driven by Armando Rodriguez Romero slammed into hers. Rodriguez Romero was here illegally from Mexico and had stolen his brother's car.

Ross suffered two broken legs, a broken arm and a crushed right foot in the crash. Her 4-year-old son also was injured and traumatized by the crash.

"For the longest time, he would just break down and cry," Ross said.

Ross lost her apartment trying to pay bills related to the crash and now lives with a friend in Arvada. Rodriguez Romero is serving an eight-year sentence for vehicular assault while under the influence.

Rodriguez Romero had four previous DUI charges over 10 years: there were four earlier opportunities for police to deport this habitual criminal, but he was allowed to stay and injure two innocent citizens.

If you want to thank the DA for standing with citizens rather than lawbreakers, write him an email at kbuck@co.weld.co.us. (Other contact info here.)