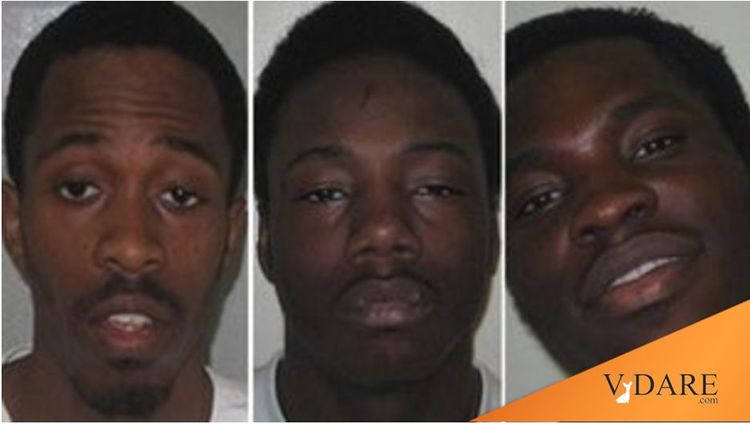 Crime In England: The Fox Butterfield Fallacy Is Back

Back in 2000, the Weekly Standard reveled in the annual headline in the New York Times from Fox Butterfield lamenting that progress against crime hasn’t led to the effort being abandoned:

The August 10 headline, much to our delight, shows that tradition is alive and well at the Times: “Number in Prison Grows Despite Crime Reduction.” It’s a bit terse, perhaps; 1997’s “Crime Keeps On Falling, but Prisons Keep On Filling” was more poetic; 1998’s “Prison Population Growing Although Crime Rate Drops” was more scholarly sounding.

In that tradition, the New York Times news section deplores at great length that tough-on-crime policies in the U.K. have succeeded in preventing the U.K. from enduring the crime wave that has engulfed the U.S. since 2020:

U.K. Doubles Down on a Tactic Disproportionately Targeting Black People

How dare the Tories continue to carry out policies that successfully reduce crime?

Jane Bradley, a U.K. investigative correspondent, obtained exclusive data and conducted dozens of interviews for a yearlong investigation on Britain’s use of tough-on-crime tactics and their racial implications.

MANCHESTER, England—The United Kingdom’s highest court delivered what seemed like a major victory for civil liberties in 2016, ruling that prosecutors had overreached for decades in using a tactic that sent hundreds of people to prison for life—for murders committed by others.

Defense lawyers, academics and activists had waged a decade-long legal battle, arguing that these so-called joint enterprise cases were unfair and racially biased.

To take an American example of this legal concept, on August 5, 1970, Dr. Angela Davis bought the shotgun that was used two days later to blow the head off Judge Harold Haley in a courtroom hostage-taking involving her boyfriend George Jackson’s brother. Dr. Davis was not present at the murder, but was charged with murder. (She was acquitted on the grounds that she was cool, or something, and went on to a life of accepting honorary degrees.)

They rejoiced at the Supreme Court decision—heralded as historic in headlines around the country—and expected a sharp drop in prosecutions, as well as scores of overturned convictions.

Six years later, none of that has happened.

Rather than be constrained by the ruling, senior prosecutors have quietly devised strategies to keep bringing joint enterprise cases and winning convictions. New data, obtained by The New York Times through public records requests, reveals that the Crown Prosecution Service, the national prosecutor, has actually stepped up the pace of such prosecutions since the ruling—even as the homicide rate remained largely stable.

The U.K. is in sharp contrast to the U.S., where The Establishment has cut back on enforcing laws large and small since Ferguson and the homicide rate is way up, especially among blacks: … The zealous use of these prosecutions is one example of how British leaders from both parties have pursued criminal justice policies that have disproportionately punished Black people. Black defendants are three times as likely as white defendants to be prosecuted for homicide as a group of four or more—a widely accepted measure of joint enterprise cases—according to the new data.

It’s almost as if white murderers are less likely to have confederates than black murderers because a larger percentage of whites than of blacks don’t want to be involved in murder.

A corollary to Sailer’s Law of Mass Shootings is that if there is more than one shooter involved in starting a mass shooting with four or more victims dead or wounded, it’s likely to be some black-on-black thing. Columbine is a famous exception to the rule that white mass shooters almost never work in teams, while black-on-black drive-bys at funerals and block parties often involve teamwork.

… While the stream of cases continued, the flood of successful appeals never materialized. Prosecutors opposed them and judges, having set an extremely high standard for appeals, rejected nearly all of them. Only a single person has been freed since the Supreme Court ruling.

The continued use of joint enterprise is one example of a British tough-on-crime policy that has grown increasingly strident. The new data—along with more than 100 interviews with current and former law enforcement officials, government insiders, lawyers, judges, academics, families and activists—shows that even as crime rates fell, as lawyers and judges protested, as parliamentary inquiries pointed to miscarriages of justice, the government’s messaging got tougher and its tactics got stricter.

Many of those tactics were imported from the 1990s war on drugs in the United States. But while American officials have reconsidered many criminal justice policies over the past decade, they have become an entrenched part of British politics.

How’s that reconsidering many criminal justice policies in the United States working out lately?

Today, British politicians fuel perceptions that crime is skyrocketing. Crime rates often vary regionally, and some crime may be up compared with the period of pandemic lockdowns. But the latest official statistics show that national crime levels, including homicide, are actually lower than before the pandemic began in 2020.

Wait, I thought the reason that the NYT had decided that homicides are up a third in the U.S. since 2019 is the pandemic (and not, cough mumble, George Floyd). So what does it mean that homicides are down in the U.K. under the tough-on-crime Tory government?

And overall, crime has been falling for decades.

Yet Britain is in the middle of its biggest prison expansion in more than a century as the Conservative government overhauls laws to seek tougher jail terms. The new prime minister, Rishi Sunak, has pledged to make crime a top priority and called for new powers to veto parole board decisions.

With new powers, police officers are ramping up the kind of stop-and-frisk tactics made notorious, and ultimately abandoned, in New York.

Periodically, and as recently as last month, official reports have highlighted systemic racism in the criminal justice system, yet they have been largely ignored. Last year, a government-backed committee said it found no evidence of institutional racism in Britain, eliciting an outcry.

Joint enterprise cases can give prosecutors an advantage by allowing them to lump defendants together and, in many instances, label them gang members. And Black people, research shows, are far more likely to be tagged with that designation.

Perhaps black youths are far more likely to be members of homicidal gangs?

After being presented with The Times’s findings, a prosecution service spokesman said that the authorities do not apply the term “gang” lightly.

“If a person helps or encourages another to commit a murder, it is right they can face prosecution for their involvement in the crime,” the Crown Prosecution Service statement said.

… In late 2011, England was engulfed by the largest civil unrest in a generation after the fatal police shooting of a Black man, Mark Duggan. Peaceful protests turned violent. Young men with their faces hidden behind scarves and ski masks looted, set fires, hurled bottles and attacked police officers.

The Tory government, using social media and security video, later tracked down and arrested about 3000 London rioters, much to the surprise of the looters. Contrast that with the submissive responses of most local governments in the U.S. to the 2020 Mostly Peaceful Protests despite huge advances in facial recognition technology over the intervening nine years. I can recall Republican administrations in San Diego and Scottsdale announcing in 2020 that they would, in effect, follow the Tory playbook, but those stood out compared to the supine responses of most cities.

The riots quickly came to symbolize simmering racial tensions and the pent-up anger among the young and the poor over government cuts to social programs. But David Cameron, then the Conservative prime minister, blamed gangs, even though official statistics quickly showed that gangs did not play a key role. The government announced millions in new money to target gang crime.

… The tough-on-crime response came straight out of an American playbook. As far back as 1992, when Bill Clinton campaigned on the Democratic message that Republicans were too soft on crime, British politicians were taking notes. Philip Gould, the opposition Labour Party’s strategy adviser, traveled to Little Rock, Ark., during that campaign and saw what he called a “road map.”

Mr. Clinton’s law-and-order message, in particular, resonated with Labour leaders, the party’s communications strategist Peter Mandelson wrote in his autobiography. It helped inspire a famous refrain of a future prime minister, Tony Blair: “Tough on crime, tough on the causes of crime.” And it ignited an arms race between Labour and the Conservatives over who could be seen as the party of law and order.

Lost in the political fight, however, was the fact that violent crime was already declining.

Property crime was ridiculously high in England when I visited in 1994. I went to a business lunch in the posh suburbs of Oxford and all my English colleagues spoke about for 45 minutes straight was having their cars stolen. Living in the suburbs of Oxford in 1994 was like being a Kia owner in 2022 America.

And despite a flurry of news reports warning of a drug-fueled crime wave, the crack epidemic never came to Britain.

“What we imported was the rhetoric,” said Prof. Tim Newburn, a criminologist at the London School of Economics who studies crime in Britain and the United States. “We borrowed the clothes of tough-on-crime from those fighting the war on drugs in the U.S. But in reality, we never had the same drug problem that the U.S. had.”

Since the mid 1990s, overall crime—including violent offenses—has fallen in England and Wales.

It still has far lower levels of serious violent crime than the United States, where the murder rate—and the imprisonment rate—is around five times as high.

The U.S. has more guns and more blacks than the U.K., so it has far more murders.

In the mid-20th century, the U.K. may have had more murders each year in new detective novels than in real life. One uncharacteristically horrific 1940s England crime—the home invasion and rape of Anthony Burgess’s future wife, which inspired A Clockwork Orange—was committed by U.S. servicemen stationed in the U.K. But by the 1990s, home invasions were pretty common in the U.K., in part because few homeowners are armed.

… As politicians, police officers and prosecutors intensified their focus on gangs, joint enterprise became an important tool. The Metropolitan Police, the nation’s biggest force, once dropped leaflets through the doors of young people they suspected of being associated with gangs, warning that they could be sent to prison “for just being present” or failing to stop crimes being committed.

The raw numbers were small—an estimated 100 to 200 people were prosecuted in joint enterprise homicide cases each year, according to an analysis eight years ago by the Bureau of Investigative Journalism. But in a country with only about 700 homicides a year, joint enterprise cases were a significant share of prosecutions.

… Research consistently shows that the police are far more likely to apply the gang label to Black people. Young Black people made up 89 percent of names on Manchester gangs database, according to researchers at Manchester Metropolitan University. In London, the picture is similarly stark.

“It is driven by a racialized gang narrative, which, increasingly, is only used in instances where nonwhite people are being prosecuted,” said Patrick Williams, a Manchester Metropolitan University sociologist who has studied joint enterprise for more than a decade.