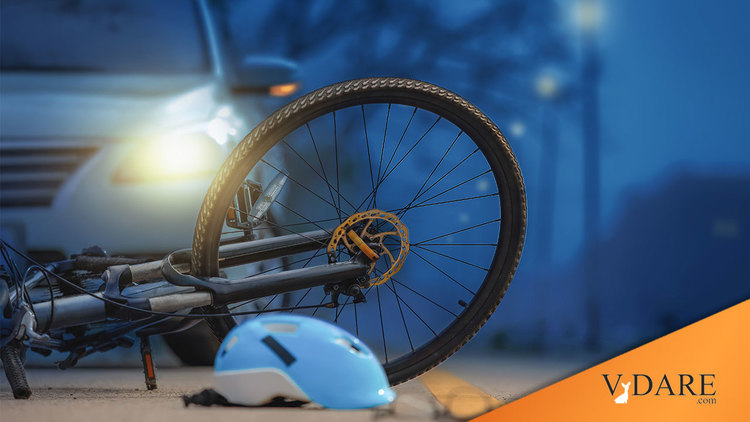 Reporter Sam Quinones’ 2021 book about recent trends in drug addiction and homelessness, The Least of Us, argues that the current formulation of meth being sold in the U.S. tends to induce the urge to steal and hoard goods, especially bikes:

Without mentioning Quinones, the New York Times gets around to vindicating his insight with a long article about how liberal biketopia Burlington, Vermont has been plagued with constant bike thefts ever since A): The city council cut back on the size of the police force in response to the martyrdom of St. George of Floyd, and B): meth finally arrived in Vermont.

The Bike Thieves of Burlington, Vermont

A hunt for stolen goods has put citizens and business owners in the center of a debate about policing and a growing, sometimes violent, problem with crime.

… Meth has had devastating effects on parts of the western United States and Appalachia, but it showed up relatively recently in Vermont.

Ken Davis, 58, who is homeless and sleeps in City Hall Park, said he had recently tried meth and “it makes you crazy.”

Others have also noticed a change. Hannah Toof, an outreach worker, said many of her clients had become increasingly volatile, behavior she attributed partly to meth.

“I no longer feel safe going into City Hall Park at any time of the day,” said Ms. Toof, who has worked in street outreach for seven years.

Those concerns are exacerbated because the outreach workers say they can no longer depend on the police to accompany them on certain calls because of staffing constraints.

Yeah, that’s kind of a problem with the 2020 Hot Idea of defunding the police to increase the number of social workers to deal with dangerous loons on the street: each social worker needs her own cop to keep her safe on street.

… In some cases, people who take meth have underlying mental health challenges. Others use meth in combination with the highly addictive fentanyl.

“Meth is a game changer,” said Ms. Boudah, the leader of the outreach team.

Some meth users are known to become fixated on stealing things — such as bikes.

Michael Hutchins, who moved to Florida last October to get away from the drug scene in Burlington, said some meth users he knew in Burlington stole bikes for transportation. “To get from Point A to Point B,” he said.

Others stole for the sheer thrill of taking something. Up for days without sleeping, some rode the bikes around with no real purpose. Mr. Davis said he had watched one bike change hands six times in the park.

Last year, when the police dismantled a large encampment in an empty lot, they found the “severed limbs of hundreds of bikes” strewn about, Chief Murad said.

“Bikes were a quick easy grab that fulfilled the need to take something for an adrenaline rush” Mr. Hutchins, 40, said in a phone interview from Florida.

Stealing and hoarding were common among the people Mr. Hutchins knew in Burlington struggling with addiction. …

Michael Corkery is a business reporter who writes about low-wage workers, the economy and industry. Before joining The Times in 2014, he reported for The Wall Street Journal and The Providence Journal. @mcorkery5

I’ve liked a number of Corkery’s articles over the years, such as his 2020 one on the Koreans who dominate the ghetto market for black hair product retailing, and his 2021 look back at the results of the forgotten racial reckoning in Rochester, N.Y. a half century ago.