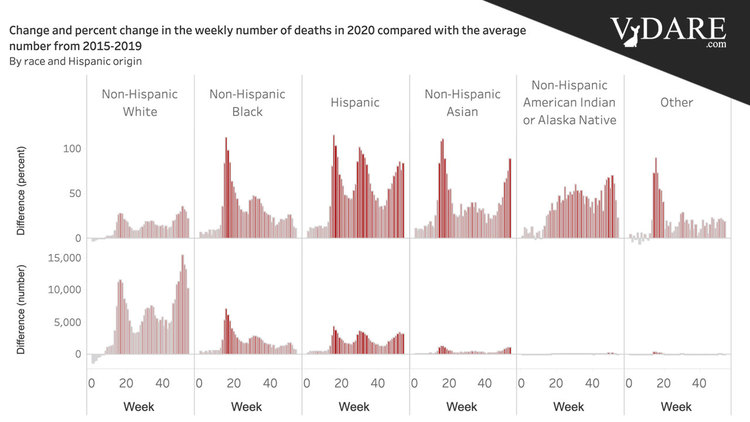 We’ve heard an immense amount about the “inequity” that caused blacks to get hit harder than whites by the first wave of the pandemic last spring, but almost nothing about how blacks were hit least hard by the third wave that is finally now receding. Here is the CDC’s graph of weekly deaths (all causes) in 2020 compared to the 2015-19 average. You can see the familiar three hump pattern. It’s interesting, however, how sharply the non-Hispanic black humps decline, with the spring being very bad, the summer not so bad, and the big Third Wave late in 2020 barely showing up. Indeed, the late 2020 wave appears to have hit non-Hispanic whites harder than blacks, although that fact hasn’t gotten much publicity. For example, in Week 50 of 2020 in mid-December, white deaths were 36% above the recent multiyear average for that week, while black deaths were 27% higher than normal. (Note, not all deaths from December have yet trickled into the CDC, so the final numbers will be a little higher.)

In contrast, Hispanics got him about equally hard all three times. American Indians just seem to have it bad all the time.

I wonder what explains these patterns.