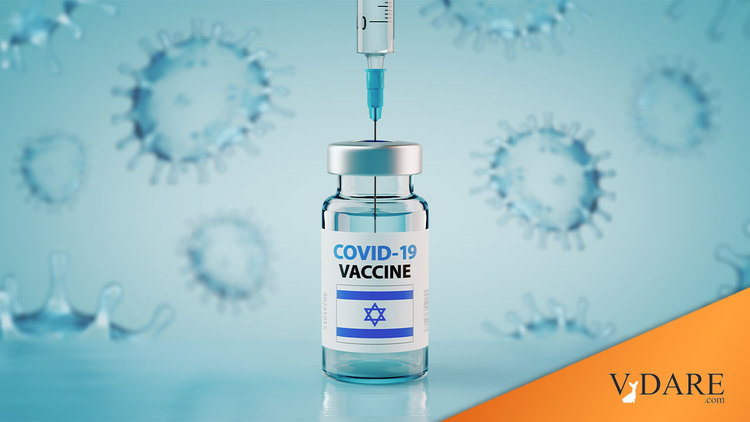 Pfizer claimed 95% efficacy in its clinical trial, but real world efficacy sometimes doesn’t live up to clinical trials. So 92% in the early stage after the second dose is pretty good.

From The Times of Israel:

‘VERY, VERY GOOD NEWS,’ IN THE FIRST SUCH STUDY IN THE WORLD
Vaccine found 92% effective in Israel, in first controlled result outside trials

Pfizer’s coronavirus vaccine is showing 92 percent effectiveness in Israel, according to the world’s first big controlled investigation on how it works outside of clinical tests.

Only 31 out of 163,000 Israelis vaccinated by Maccabi Healthcare Services were diagnosed with COVID-19 in their first 10 days of full-strength protection, its top vaccine statistics analyst, Anat Ekka Zohar, told The Times of Israel on Thursday.

Maccabi found that an equivalent sample of unvaccinated Israelis was 11 times more likely to be diagnosed with the coronavirus, which allowed it to calculate the effectiveness rate.

“This is very, very good news,” Ekka Zohar said. “It is the first study in the world that looks at such a large number of fully vaccinated patients.”

Pfizer achieved 95% efficacy in clinical trials, and doctors worldwide are looking to Israel with bated breath to see whether the vaccine comes close to that figure in real-world use.

Maccabi figures released earlier this week indicated that vaccination is working very well, but lacked a control group that made it hard to extract an accurate effectiveness rate.

Now, Maccabi has analyzed a control group of Israelis with similar age and health profiles of vaccinees, composed entirely of people haven’t been infected or received shots.

This allowed Maccabi to calculate its real-world effectiveness rate. It used complex calculations, similar to those used by Pfizer in trials, to compare vaccines and the control group and determine the extent to which the vaccine appears to be preventing infection.

“This is very exciting,” said Ekka Zohar. “It’s a very high level of effectiveness and we are seeing a very low percentage of coronavirus among the patients who have taken both shots.”

Full protection is believed to kick in a week after the second shot, so Maccabi’s data covers all of its members who are between seven and 16 days after receiving it.

Israel’s vaccination program has been so extensive, with them giving out doses equal in number to half the population of Israel (but not of the Occupied Territories), that next week we ought to be able to see clear impacts on the total national numbers, such as a falloff in the share of cases and perhaps hospitalizations among Israel’s older population. Quasi-experiments like Maccabi’s with control groups are great, but eventually the efficacy of Israeli-scale vaccinations will have to show up at the national scale or something unknown is very wrong.

New cases in Israel have been mostly falling over the last week, but then they are falling in lots of other places as well, such as California, where vaccinations have been running at a rate an order of magnitude less than in Israel.

So, we ought to be seeing easily detectable macro-scale effects out of Israel by next week.