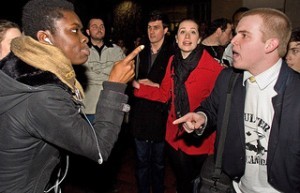 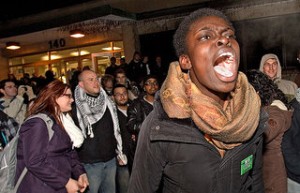 Kathy Shaidle has some photographs from Ottawa, where Ann Coulter's speech was shut down by protesters. Here are some images of the sensitive people who can't stand harsh speech. See also my main page Fulford File: Ann Coulter And Canadian Human Rights–Americans May Be A Protected Minority In Canada, But Who's Going To Protect The Majority?, which Kathy was kind enough to link to. A report from a local paper seems to be totally blaming Ms. Coulter, and blaming the rioters not at all:

Huge crowd upset after plug pulled on Ottawa U event By JUSTIN SADLER and DOUG HEMPSTEAD,

It’s just the thing conservative author, commentator and self-described polemicist Ann Coulter is known for: Dividing her audiences. Coulter was scheduled to speak before an audience gathered at the University of Ottawa’s Marion Hall Tuesday evening. Instead, security concerns raised by the university kept the Republican firebrand from speaking.

Organizers pulled the plug on the speaking engagement because there were just too many people – too many of whom were just too rowdy. ”At a university, instead of free speech, censorship,” said Ezra Levant, a Canadian conservative writer, lawyer and blogger who was scheduled to introduce Coulter. Coulter was at the university for the second stop of her Canadian speaking tour to dish on political correctness, media bias and freedom of speech.

Police were called by the university to assist after students of all political stripes descended upon the auditorium to hear the talk – some of them lining up for more than two hours in the rain – only for it to be cancelled a half-hour after it was due to begin. More than 2,000 people tried to get into the event, several times the capacity of the venue. ”We were called to ensure the crowd left in an orderly fashion,” said Ottawa police Sgt. Rob Gilchrist. No arrests were made and no injuries were reported. [More]