ROME, Jan 11 (Reuters) - Italy's defence minister warned the country's Muslims to stop further "provocations" after thousands held prayers in public squares in Milan during pro-Palestinian demonstrations over the past week.

Ignazio La Russa, from the right-wing National Alliance, said he did not oppose protests or want to deny anyone the right to pray, but called the public prayers a challenge to peace.

"I say enough of the provocations of Islamists in Milan," he told Il Giornale newspaper on Sunday. "In Milan, a legitimate demonstration ended in a deliberately provocative mosque under the open sky."

In fact, concern over encroaching Eurabia prompted a mass to be held a few days later on the same spot, to reset the vibe more or less.

The press has had reports of Muslims "to apologize" but no expressions of regret have yet appeared, nor are they likely given the belief in taqqiya (purposeful deception to advance Islam by any means necessary). Jihadists don't apologize, but have been known to prevaricate and postpone when they see such a move as strategic to their interests.

The act under consideration is the traditional up-butt salute (shown below) delivered by hundreds of hostile Muslims in front of one of the world's most beautiful cathedrals as part of an anti-Israel rally. 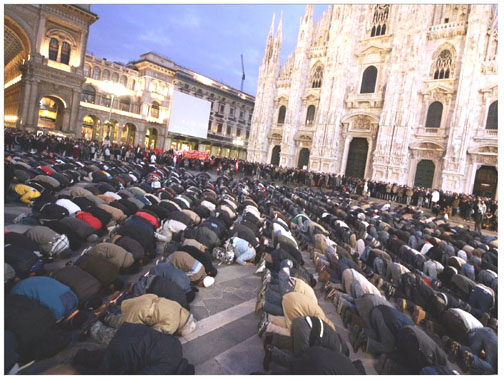 How would Muslims like it if the Pope held a mass in front of the Kaaba? Oh wait, Christians and other non-Muslims cannot even enter Mecca.