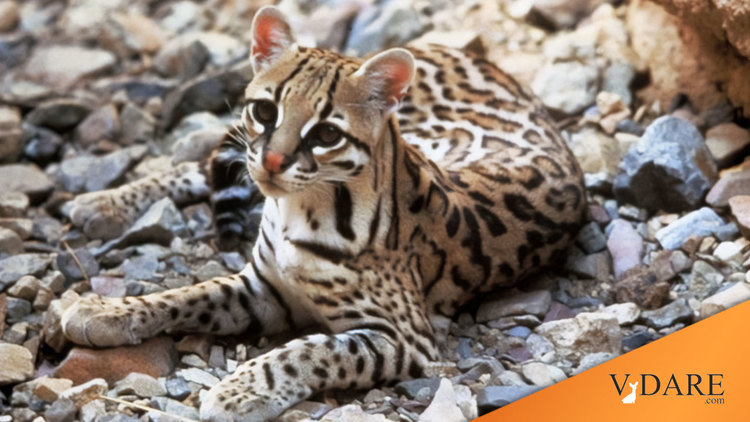 Conservationists Want To Protect Ocelots From Fences, But Not Illegals

When I was a kid in the `70s, we used to have commercials warning of the dangers of overpopulation. Environmental groups were at the forefront of warning of the problems overpopulation presented. Well, apparently, if you give a big enough donation (bribe) to an environmental group, you can get them to flip on that issue with no problem. The lawsuit below, by something called the Center For Biological Diversity,  is a preventative measure to keep the Biden administration from building any wall masquerading as a border levee. Ostensibly, the intent is to help the ocelot, a very rare and shy cat that lives in South Texas.

A national nonprofit conservation organization has filed a formal notice of intent to sue DHS and CBP, accusing them of failing to protect ocelots, which have been on the endangered species list since the 80shttps://t.co/QwuL9EOGAV

There's a park in south Texas called Santa Ana National Wildlife Refuge. The naturalists working for the U.S. Fish and Wildlife had set up a remote camera to try to take pictures of it. They were not very discreet about it. I don't think the camera was infrared because they had tied an aluminum pie pan to a tree to ensure that the flash bulb would get a nice picture of the intended target. The illegal aliens came through at night, saw the reflection of the pie pan and destroyed it and the camera too. They must have thought it was one of the Border Patrol sensors.

I was fortunate to see an ocelot a single time when I was down there. When I first saw it (at night) I couldn't make sense of what it was. You could tell it didn't move like a house cat. I worked a lot of nights and saw javelinas, armadillos, skunks, rabbits, coyotes and possums. However, the ocelot is a notoriously shy and secretive animal, which is why I saw one only once. I bet that loads of illegal aliens traipsing through their hunting grounds at night are a far bigger disturbance to them than building a border wall. If the ocelots could vote, I'm pretty sure they would be voting for the wall. Those bollard fences have gaps wide enough for them to get through, while preventing human access.