Incessantly peddling his health-insurance nostrum (i.e. the "Patient Protection and Affordable Care Act" [PPACA]), the president addressed Congress on September 9, 2009 and claimed that "The reforms I'm proposing would not apply to those here illegally."  This prompted Representative Joe Wilson (R-SC) to yell, famously, "You lie!"

Wilson was promptly castigated for his horrendous breach of congressional decorum by all his congressional betters, including that paragon of polite discourse, Senator John McCain (R-AZ).  And Wilson did promptly apologize.

You can see this burst of indecorum by viewing the first seven seconds of the video at this link, or above.

The remaining 4:33 of the video, from August, 2011, consists of Fox News anchor Megyn Kelly in an exchange with Wilson, looking back on his moment in the national limelight. Wilson remained apologetic about his horrendous misbehavior while pointing to contemporary evidence that he'd been correct: He said that much of a $28.8-million grant, made possible by the PPACA, was to serve migrant farmworkers, a large fraction of whom are illegal aliens; and there would be no checks for legal status of those served. [HHS: Obamacare-Funded Health Centers for 'Migrants' Won't Check Immigration Status, By Matt Cover, CNSNews.Com, August 10, 2011]

(Asked by Kelly if he had any empathy for illegal aliens with health problems who might benefit from this, Wilson responded, "Oh, I certainly do.  They should receive care, and then they should immediately be assisted to return to their home countries."  [My emphasis] Yay! That's keeping your eye on the ball, Joe!)

[I]t would appear that the White House owes Wilson an apology, as Covered California—the flagship of state Obamacare exchanges—is recruiting illegal ("undocumented") immigrants to sign up for the program, regardless of their eligibility. 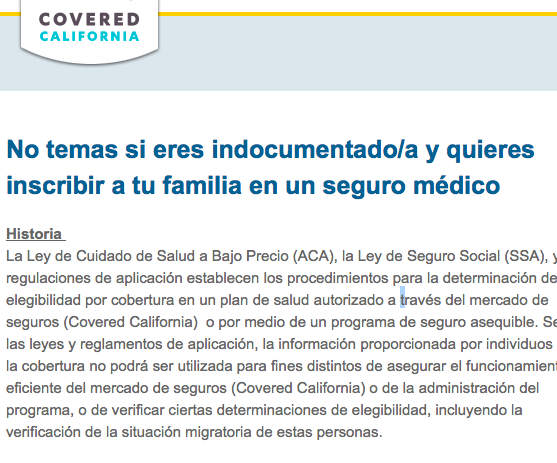 The Covered California website includes a special page entitled: "No temas si eres indocumentado/a y quieres inscribir a tu familia en un seguro médico" ("Fear not if you are undocumented and want to enroll your family in health insurance"). The website goes on to explain that information shared with Obamacare cannot be shared with Immigration and Customs Enforcement (ICE). It does not explicitly warn that illegal aliens are ineligible.

"According to the laws and implementing regulations," the website says, "the information provided by individuals for coverage can not be used for purposes other than ensuring the efficient functioning of the insurance market ( Covered California) or administration of the program, or to verify certain eligibility determinations including verification of the immigration status of these people."

So surprise, surprise!  Actually, no.  Our default assumption should be that illegal aliens will be tapping into any and all public benefits, even when they're nominally excluded.

(One way this happens was described to me by the late, lamented immigration super-patriot Terry Anderson.  He knew of cases wherein an illegal-alien mother with citizen children [i.e. anchor-babies] would get benefits for those children but also for her older children who were born outside the U.S. and, hence, were illegal aliens, too.

With their illegal status, such older children wouldn't qualify for benefits.  But the wink-and-nod "compassionate" bureaucrats in the Los Angeles County welfare departments, who were always ready to be "generous"—with other people's money, of course—would pile on benefits for the ineligible kids, too.  Presumably people with this kind of mentality populate welfare agencies nationwide; it takes a certain kind of person to want to work in such places.)

However, a California state senator with an Hispanic name (Ricardo Lara of Long Beach and southeast Los Angeles) might not yet have received the news reported by Pollak, since the senator has just introduced a bill titled the "Health for All Act," which would give illegal aliens access to Medi-Cal (California's version of Medicaid, which receives both state and federal funding).

Meanwhile, I've endeavored to buttress Congressman Wilson's excellent instincts by making sure his Washington, DC office knows about the Pollak article.  I talked to a staffer, got his email address, and sent him the link.  But to make sure the word spreads more widely among the congressman's staff, I encourage South Carolinians who live near Wilson's district offices in West Columbia or Aiken to print the article and then drop in to give their "Attaboy!" in person.  Or phone: 803-939-0041 and 803-642-6416, respectively.