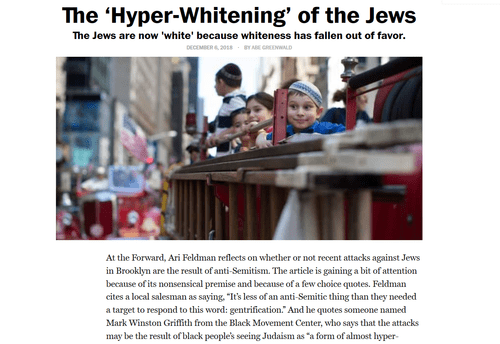 COMMENTARY Magazine: "The ‘Hyper-Whitening’ of the Jews"

The ‘Hyper-Whitening’ of the Jews

The Jews are now ‘white’ because whiteness has fallen out of favor.
DECEMBER 6, 2018 BY ABE GREENWALD

At the Forward, Ari Feldman reflects on whether or not recent attacks against Jews in Brooklyn are the result of anti-Semitism. The article is gaining a bit of attention because of its nonsensical premise and because of a few choice quotes. … he quotes someone named Mark Winston Griffith from the Black Movement Center, who says that the attacks may be the result of black people’s seeing Judaism as “a form of almost hyper-whiteness.”

To reject these explanations as preposterous and offensive is, of course, righteous. But to do that alone is to miss something critical. It’s also important to take these claims at face value. Not because they have merit, but because they show precisely how anti-Semitism works and what it is.

The Jew is hated as whatever the anti-Semite holds responsible for his own misfortune. … And if 100 years ago, American bigots saw Jews as Asiatic cross-breeds, today bigots see them as “hyper-white.” If you want to know what a culture considers most problematic, look at its brand of anti-Semitism. When you have headlines about “white privilege” and “evil white men,” Jews become the epitome of whiteness—except, of course, for neo-Nazis, who see Jews as hyper-integrationists. …

Okay … well, maybe then it would be prudent for Jewish journalists to ease up on the White Privilege talk? Rock-throwing black adolescents in Crown Heights can’t really tell a Bad Gentile Becky from a Good Jewish Becca, and even if they could, they don’t care, so maybe it’s time for Jewish writers to start pointing out to each other that the Beckys and Beccas are all in the same white boat together.

I think that’s Mr. Greenwald’s implicit point, but it would be nice to see somebody spell it out.

What’s important is to recognize that when Jews are targeted for being what they aren’t, that’s anti-Semitism. Period.

Presumably, that means that something empirically accurate can’t be anti-Semitic.

Mr. Greenwald might want to mention that to his boss, Mr. Podhoretz, who tends to blow a gasket when I make fun of Harvey Weinstein.