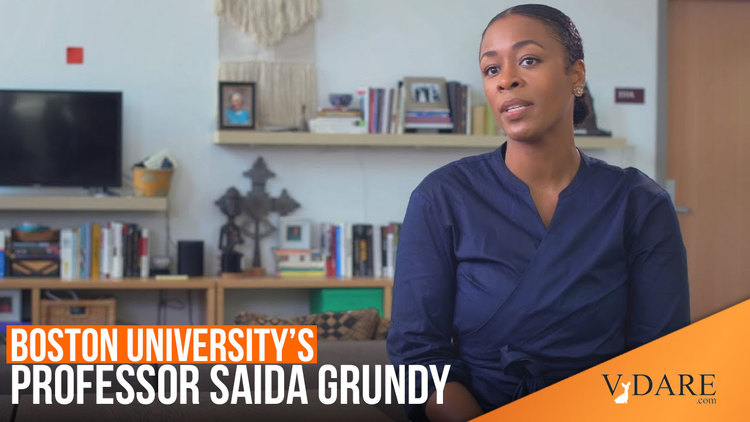 What did you think the equity in the push for diversity and inclusion meant?

Property is racist, and the Black Lives Matter riots following the death of George Floyd are ultimately excusable, according to an assistant professor at Boston University.

Saida Grundy, [Email her] an associate professor at Boston University’s Department of Sociology & Program in African American Studies, was one of the featured “members of the BU community” in a Twitter thread posted on Wednesday, the two-year anniversary of Floyd’s death.

If we’re going to talk about George Floyd and really understand it, then we need to understand community reactions to it,” Grundy says in a video featured in BU’s Twitter thread.

And we often hear politicians, we hear civic leaders from inside Black communities and from outside of them as well... we hear President Biden say, 'Y'know I understand your frustration, but don't destroy property,'" Grundy continues in the video. "Well, when you say that to Black people, who historically have been property, one of our greatest weapons was the looting of ourselves as property from the system of slavery. And what we see in communities is they are reacting to the very racism of what we call property.

“I think it's very important for people who see reactions in communities not to judge or make assumptions about what is good and not good reactions. And not actually re-victimize communities by saying there's an acceptable and not acceptable way to react.”— @BU_CAS's Saida Grundy pic.twitter.com/FK85qVF3Xf

Several riots broke out across America due to Floyd’s death. Groups of rioters, including members of the Black Lives Matter movement, caused hundreds of millions of dollars in property damage in over 1,000 locations during that span of time, Fox News reports.

Grundy apparently considers the riots and property damage understandable. She even excuses the actions, asking Americans not to judge or make assumptions about those involved in the destruction.

I think it’s really important for people who see reactions of communities to not judge and to not make assumptions about what is good and not good reactions and not actually re-victimize communities by saying there’s an acceptable and a not acceptable way to react,” Grundy says in her featured video. “Listen to them, and then we can say what these communities need.

The National Desk reached out to Grundy regarding her remarks, but she has yet to respond. Her statement will be added to this article if and when it is provided. Grundy’s Twitter account is private at the moment.

Grundy has previously faced online backlash for comments she made about White people, according to a Boston Globe article.

In 2015, she reportedly tweeted “why is white america so reluctant to identify white college males as a problem population?” and “every MLK week i commit myself to not spending a dime in white-owned businesses. and every year i find it nearly impossible.”

To paraphrase the villain from 2004’s The Incredibles, “if all property is special (equal), no property is…”

That burning down commercial property owned by white people is viewed as an act against racism by black intellectuals is another reminder what diversity, inclusion and equity truly mean… destroying white wealth to make sure no one is special.