Moynihan's Law Of The Canadian Border Applied To Civic Funniness 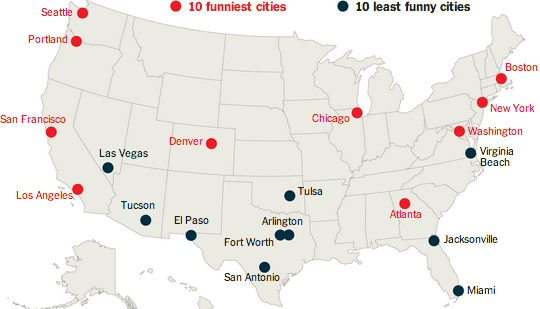 Two U. of Colorado professors have attempted to quantitatively rank America's 50 biggest cities on funniness:

His findings were drawn from surveys of residents (on the prevalence of humor in their daily lives) and of comedians, number of visits to comedy websites, tweets, radio stations, comedy clubs per square mile and native-born comedians per capita.

This seems like a hopeless effort. Yet, the topline finding—Chicago is the funniest city in America — seems not unreasonable. Off the top of my head, I probably would have picked Chicago #1 (although I might guess Toronto if North America was the category). I'm not exactly sure how I would have arrived at Chicago as my guess, but it's certainly reasonable. Los Angeles, of course, has a gigantic abundance of comedy professionals from all over the country, and there is more goofy stuff in Los Angeles than anywhere else. But I'm not sure if Angelenos on average as aggressively get the joke as Chicagoans.

Interestingly, this map with red dots for the ten funniest cities and black dots for the bottom ten looks a lot like the usual Moynihan's Law of the Canadian Border, such as lists of America's most well-read cities (Atlanta does well there, too).