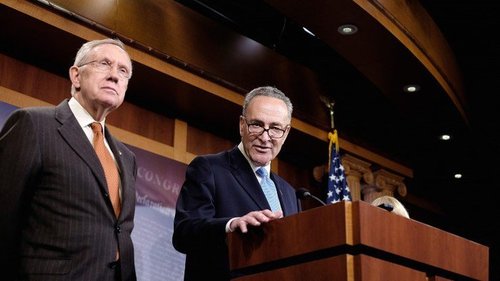 Schumer At the National Press Club, rebuking the media for not delivering

I just saw this on Twitter, and it's fascinating:

Sen. Chuck Schumer, the biggest media hound in the history of the known universe, rips the media. http://t.co/voZiJI7YIM

That's a story called Schumer slams 'sensationalist' press By Burgess Everett, Politico, November 25, 2014, in which we learn that

Government’s “failure to deliver” contributed to Democrats’ catastrophic losses this fall, but Sen. Chuck Schumer did not blame the Obama administration. Enthusiasm for his own populist Fair Shot Agenda was muted on the campaign trail, but Schumer called it the “greatest success” this year for Democrats in a dismal election.

But the media? The New York Democrat had no trouble taking the knives out for the press.

In a 50-minute stemwinder at the National Press Club on Tuesday about Democrats’ economic agenda going forward, Schumer repeatedly whacked the “negative” and “sensationalist” media for seizing on a cynical mid-term narrative that highlighted government’s failures and none of its success.

Then in a chaotic 20-minute press availability after the speech, Schumer blamed the media for pumping up voters’ Ebola fears — highlighting the fact that now that the election is over, Ebola has largely dropped off the front pages and off the GOP’s talking points.

“You can't prevent things from happening in the world from changing quickly. Nor frankly, no offense to anyone in this room, can you prevent the press from focusing on the negative in a sensationalistic way,” Schumer told a room full of reporters. “Look at the Ebola stories the few days after it happened. The average American watching it said: ‘I’m going to get Ebola.’ I had calls from people: ‘I shouldn’t go on an airplane, I shouldn't go on a subway.’ That didn’t come from nowhere.”

Schumer is quoted as saying “The VA, invaders at the White House, the border, Ebola and ISIS [were] all fueled by an unrelenting and sensationalist media that exaggerated hype and emphasized the negativity of these events,” but in reality, the Main Stream Media, which has been described by former CBS insider Bernard Goldberg as having a "slobbering love affair" with Obama and the Democrats tried very hard to put a Democratic spin on all of this.

In DMV offices across the country, workers occasionally put up a sign that says "If you want a better picture, bring a better face."

The media tried to put a better face on Obama's failures, but they didn't try hard enough for Schumer.

Post
This Day In VDARE.com History, 2007: The High Price Of Strawberries—Unskilled Labor Costs Taxpayer $3 For Every $1 Of Wages
MORE...
POPULAR TAGS