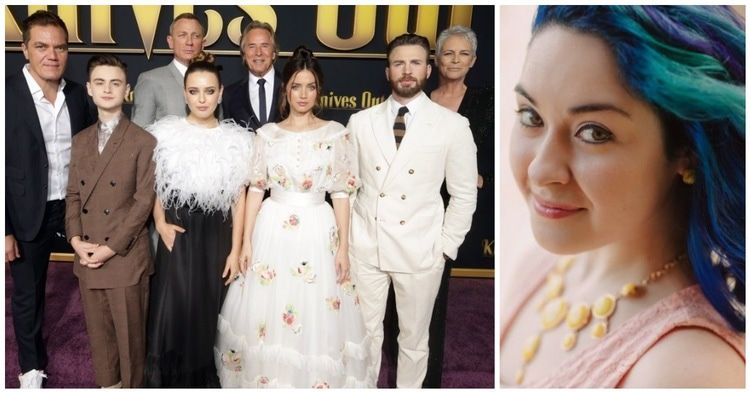 NYT: "Knives Out" Is a Giant Microaggression Against My Feelings as a Latina

Rian Johnson wrote and directed the amazing high school noir detective film Brick, although his subsequent movies, such as Looper, didn’t quite live up to his debut. Now he’s back with “Knives Out:”

Obviously, that raises the burning issue of how does the movie make a young Woman of Color [mostly blue] feel? The New York Times opinion page brings us this burning news:

Why I Left ‘Knives Out’ With Emotional Whiplash

What it’s like to watch a movie in which your greatest fears are played for giggles.

By Monica Castillo
Ms. Castillo is a film critic.

In “Knives Out,” the writer and director Rian Johnson pays tribute to Agatha Christie and “Clue” in a star-studded whodunit that begins with the mysterious death of the wealthy author and patriarch Harlan Thrombey (Christopher Plummer). Almost every one of his heirs falls under the suspicion of the private investigator Benoit Blanc (Daniel Craig) at some point, including Harlan’s caretaker, Marta (Ana de Armas), a woman so pure of heart, she can’t lie without becoming physically ill. …

Ana de Armas is a Cuban actress who played Ryan Gosling’s holographic girlfriend in Blade Runner 2049. To my eye, she looks slightly less Woman of Colorish than, say, Swedish starlet Alicia Vikander, but Ms. Castillo totally identifies with how Ms. de Armas’s is oppressed and erased.

Unfortunately Mr. Johnson’s ambitions on this front reminded me that sometimes, well-intentioned art can backfire and offend (and even hurt) those it’s intended to champion. Through the character of Marta, “Knives Out” has a tendency to exploit its story’s immigration angle, which left me feeling uneasy as strangers at the screening I attended laughed at real-life issues I’m genuinely frightened of.

Marta is someone the Thrombeys can show off to make them seem more progressive than they actually are. Eventually, their ease with quoting “Hamilton: The Musical” gives way to a full-on display of their prejudices. None of them seems to know or care where she’s really from, each time guessing a different country. This is played as a running gag that is ostensibly intended as a critique of white upper-class liberalism. Yet Mr. Johnson keeps Marta’s background a mystery to the audience as well, never allowing her any cultural specificity beyond being vaguely Latina. (Ms. de Armas is Cuban.)

I once suggested “Vaguely Latino” would be a good name for a rock band.

By denying Marta a part of her cultural identity, the movie perpetuates the myth of Latino homogeneity, that our countries and customs are interchangeable, mashed together to fit neatly into a census box.

The film takes pains to cast Marta as an outsider in other discomforting ways. During a family argument, the youngest in the family, an alt-right troll, calls Marta an ethnic slur. In another scene, she’s called upon to clarify whether her family came to the United States legally, or “the right way,” as one of the Thrombeys puts it. Another member of the family hints that he could have her mother deported because she’s undocumented. Several family members assert, patronizingly, to Marta that they have “always taken care of” her.

I can imagine Mr. Johnson views this pile-on as a way to call attention to the microaggressions working-class immigrants face daily, but the family’s cruelty felt stifling — it’s troubling to see Marta saddled with so much real-world baggage. …

Maybe Mr. Johnson, who is white and American-born, wasn’t apprehensive about pushing the matter of deportation so far — presumably, his proximity to the subject isn’t the same as it might be for a brown person who is undocumented. …

Of course, Ms. Castillo will probably now get dragged on Twitter for using the word “Latino” rather than “Latinx.”