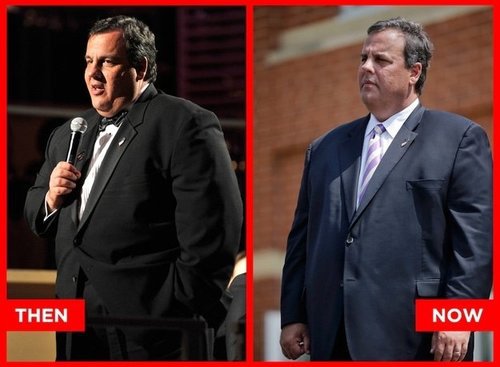 He may have lost weight, but he hasn't dropped his support for amnesty.

Oh, that Chris Christie.  He's so blunt, so forthright, so aggressive!  He's exactly the kind of challenger Republicans need to speak to truth to power.

Except on immigration.  Don't ask him about that.  I mean, he's only traveling in Mexico, so clearly questions about immigration are irrelevant anyway.

During remarks to the press, Christie actively challenged reporters who pressed him on the issue. "I know you guys are begging to have me focus on immigration, and let me put you to rest: I'm not going to," he said, according to CNN's Ashley Killough. "You can ask in 18 different ways. ... I'm not giving you the story, so you can move on to whatever your next questions are."

According to the Department of Health and Human Service, at least 1877 unaccompanied minors have been released to sponsors in New Jersey this year.

Christie asserted that he had "no role" in the immigration debate as governor of New Jersey, unless it affected his constituents. He told reporters that he wouldn't articulate his position on immigration reform until he decided whether or not he would run for president.

"I won't have anything to say on immigration unless and until I become a candidate for President of the United States," he said. "If that happens, then I will articulate a full position on it."

As the Republican governor of a Democratic state, Christie has a record of supporting some kind of immigration reform. “The President and the Congress have to step up to the plate, they have to secure our borders, and they have to put forward a common sense path to citizenship for people,” Christie told ABC in 2010.

In January 2014, Christie signed the DREAM Act in New Jersey, allowing children of illegal immigrants to receive in-state college tuition rates."You’re an inspiration to us because in you we see all that our country can be," Christie said to a group of DREAMers during the signing ceremony. "In you we see, most importantly, infinite possibilities of the human spirit."

[Chris Christie Tells Reporters to back off on immigration questions, by Charlie Spiering, Breitbart, September 5, 2014]

Like Rand Paul, Christie's position on immigration is whatever the political winds favor at the immediate moment.  What's his (formidable) gut position?  Again, like Paul, it is probably as pro-amnesty as possible, with head fakes to bring along enough Republican rubes to get the nomination.