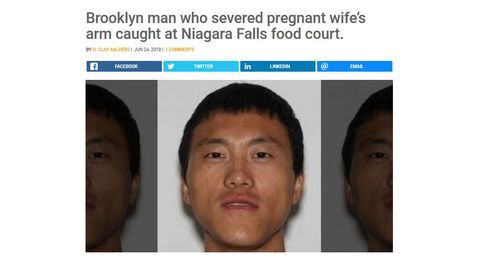 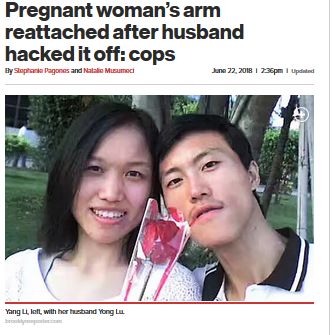 From the website The Truth About Knives, which monitors knife crime:

What do you do after cutting off your pregnant wife’s arm and a couple of fingers? Take a trip to Niagara Falls of course. He was actually trying to sneak into Canada, in flagrant disregard for their immigration laws. He tried to sneak across the border in a bus’s luggage compartment, and at the time of his arrest, he was wearing a life jacket.

A New York City man who allegedly cut off his pregnant wife’s arm and escaped Brooklyn was arrested near Niagara Falls on Saturday — as police said he may have been plotting to swim to Canada.

Yong Lu, 35, was taken into custody in the One Niagara building around 7:45 p.m., The Buffalo News reported.

Niagara Falls Police tweeted a photo of Lu getting arrested in a food court. The department credited the New York Police Department and the U.S. Marshals Violent Fugitive Task Force for aiding in the arrest.

Very proud of the professionalism displayed by one of our newest officers!
This is a text book arrest due to proactive policing during a potentially deadly situation that ended without force and the apprehension of a very dangerous suspect
And all with his NFPD 8 point hat on! pic.twitter.com/vKYAbVJ38G

Lu was wanted for allegedly cutting off his wife’s arm and two fingers on her left hand with a steak knife in Sunset Park on Thursday just after noon, according to the New York Post.

Lu’s wife, 31-year-old Yang Li, was inside their home waiting for their 7-year-old son to finish school. Lu reportedly became angry and went on a rampage.

The Truth About Knives sees this a knife crime, which it is. A typical Chinese cleaver, like this one, is a foot long, weighs a pound and can take off not only an arm, but a head. (If a policeman shoots an immigrant armed with one, you'll hear that the deceased was practically unarmed.)

But also an immigrant crime--a crime that wouldn't have happened in America without mass immigration. Are these kinds of stereotypical crimes common among modern Chinese immigrants? Who knows? The press doesn't want us to know.