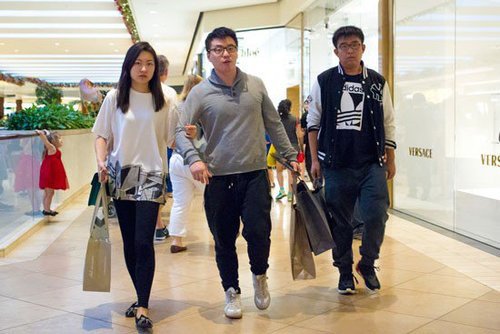 … The quintessential mall for OC’s rich set, one of the most lucrative in the United States, is now a major tourist attraction for tens of thousands of Chinese: Orange County families having their second or later child, students parachuted into the United States to attend high school or college, corporate types staying for a quick meeting and some leisure time. …

Three distinct subsets of Chinese now haunt South Coast Plaza. The most obvious is people who come here for birth tourism. Many birthing house operators include trips to the mall as part of their up-to-$50,000 all-inclusive packages, (see “The OC Weekly Guide to Chinese Birth Tourism,” May 27). The trips are frequent enough that many expectant mothers—accompanied by nannies, their husbands, older children or chaperones—walk around the mall as a form of prenatal exercise, dropping into stores to browse. Many birth tourism homes are located within walking distance of the mall, making repeat visiting mothers a common occurrence.

Though the shopping center doesn’t directly market to birth tourists, South Coast is known enough in Chinese tourism circles that offering visits to the mall is a plus. Lately, large groups have become more common, especially as group walks around OC’s luxury apartment buildings that unwittingly serve as birth houses have drawn increased scrutiny since the summer months. The birth tourists are easiest to find in the middle of the day, when all of the businesses are open, and the walkways are less crowded. …

Because, as we all know, birth tourists are the Real Americans.

The last major clan of Chinese nationals at South Coast Plaza are high-school- and college-aged kids sent to the U.S. alone to get educated. Often the children of China’s wealthiest class, they’re the conspicuous consumers, spending without pause at Louis Vuitton, Rolex and the like. They’re easiest to find at nights, when the stores are preparing to close, and can be identified by their fashion-forward dress and lack of interaction with anyone who’s not a direct friend.

There are some snarky details about how Chinese princelings won’t acknowledge sales clerks, although Mr. Lam doesn’t explain why not: class consciousness or shyness?
[Comment at Unz.com]