Change.org Wants VDARE.com & Friends' Scalps —Will Twitter Give In? 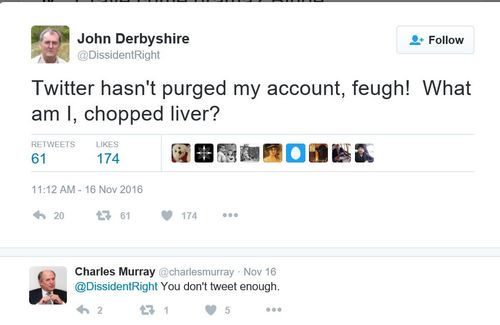 Speaking as the Solar System's least enthusiastic Twitter user, I wouldn't mind a bit if the whole silly thing went away. It doesn't look as though it's going to though, certainly not under our incoming Tweeter-in-Chief, so I guess I have to resign myself to reporting the Twitter news.

As is the case with the Southern Poverty Law Center, another dot-org, the "dot-org" in "Change.org" is deliberately misleading. Change.org is a money-making enterprise. The Wall Street Journal, back in 2012, estimated its revenues at $15 million a year. That's way below the SPLC figure, but way, way above any Alt Right outfit I know of. There's a lot of money to be made in Cultural Marxism.

What's any of that got to do with Twitter? Well, the latest petition being promoted by Change.org is addressed to Jack Dorsey, the CEO of Twitter. The following extract from their covering letter, which is headed "500 Nazi Scalps," gives you the gist, quote:

We've gathered the top 500 Nazi and white supremacist accounts on Twitter. We listed them. [There's a link to the list.] We'd like them gone. We'll be checking in weekly to see the progress to goal.

End quote. That closing mention of kicking off Nazis refers to Twitter's banning of MTV bimbo and Alt Right bad girl Tila Tequila back in November.

Ms Tequila actually has said favorable things about Hitler. Since her family were Vietnamese boat people, possibly she just sees old Adolf as a good vigorous anti-communist. The Führer used to have a small constituency among Chinese people in Hong Kong and Taiwan on the same basis. There was actually a star of the ten-pin bowling circuit in Hong Kong circa 1970 using the English name Hitler Wong.

I would tell you more about Ms Tequila's political philosophy if I could be bothered to investigate it. To carry out that investigation, though, would be like looking for precious gems in the cat's litter tray, so I shall pass.

Back to this petition. Who are these "top 500 Nazi and white supremacist" accounts that Change.org wants purged — or, as they themselves put it, "scalped"? Well, they are ranked by number of followers, and guess who's at the top? Yes, it's us, VDARE.com.

Well done, everybody at VDARE, and thanks to all the supporters and donors who helped put us at the top of the list. It seems to me that there ought to be some kind of trophy awarded, a silver cup or something that we can put on Peter Brimelow's desk, but Change.org doesn't mention this, so perhaps not.

Among the other names I recognize, Jared Taylor's personal Twitter account is at number 4, American Renaissance itself at number 11, Steve Sailer at 22, the Chateau at 27, Matt Heimbach at 74, HBDchick at 100, Occidental Dissent at 108, and DissidentRight at 116.

Note that last one, please: DissidentRight is actually … me! [Applause.] Further down, at 186, is the @DerbQOTD  account,  run by a fan who posts my most memorable lines. So I'm on the list twice, at least in spirit — three times if you count VDARE. [Applause, cheers.]

Will Mr Dorsey act on this Change.org petition, and throw us all off Twitter? He might. I don't know anything about the guy, but from his pictures he looks like the very model of a modern metrosexual. And these software giants — people like Bill Gates and Zuckerberg — are all CultMarx compliant. When George Soros says "Jump!" the response comes echoing back from Silicon Valley: "How high?"

Well, as I started by saying, it wouldn't break my heart to lose Twitter. One less thing to fritter away time on. I wouldn't be bitter at all …