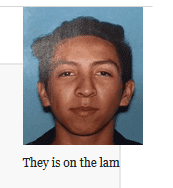 Police are looking for a person described as armed and dangerous who authorities say is responsible for Berkeley’s first homicide of 2017.

After a seriously wounded woman flagged someone down for help just north of the UC Berkeley campus shortly before noon Friday, police ultimately located a “violent crime” scene and discovered the body of a person they say has not been identified in the 2400 block of Ashby Avenue.

No information about the victim has been released. 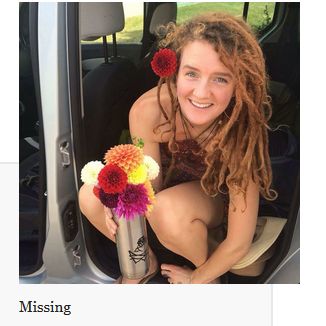 An earlier Berkeleyside article identified this young woman as missing:

Police have identified the wanted person as 24-year-old Pablo Gomez Jr. of North Hollywood. According to Gomez Jr.’s Facebook page, they are a UC Berkeley student who lives in Berkeley. [A friend contacted Berkeleyside after publication to say that Gomez Jr. uses the pronoun “they.” This story has been updated.]

Never misgender an accused murderer on the run.

Gomez Jr. has been described as Hispanic, is 5 foot 6 inches tall and 110 pounds, and has brown hair and brown eyes. Police ask anyone who sees Gomez Jr. to call 911 immediately.

“A witness who saw him earlier in the day reported that he had shaved his head which may have been done in an effort to alter his appearance,” police said in a statement released late Friday night.

… Gomez Jr. has been involved with UC Berkeley’s Queer Alliance Resource Center, according to the group’s Facebook page, and recently helped organize a chalk protest on campus related to sexual assault, the Daily Californian reported in September.

Gomez Jr. is studying “Chicanx/Latinx Studies” according to their Facebook page, and is a senior climate action fellow at Alliance for Climate Education.

This “fellow” word sounds triggering with its implicit gender assumptions. Maybe that’s why they did it?

When the cops catch them, will they be charged with conspiracy to commit murder?

Update: They is in custody

A UC Berkeley student wanted by police in connection with a homicide Friday, as well as a stabbing that sent a young woman to the hospital, is now in custody, authorities report.

Police identified the wanted person as 24-year-old Pablo Gomez Jr. of North Hollywood. According to Gomez Jr.’s Facebook page, they are a UC Berkeley student who lives in Berkeley. [A friend contacted Berkeleyside early Saturday to say Gomez Jr. uses the pronoun “they.”]

Berkeley Police Sgt. Andrew Frankel, department spokesman, said BPD got a call at 1:30 p.m. from a Burbank police officer who said Gomez Jr. was in their custody. They will now be booked into the LA County Jail.

Frankel said, shortly before 4:30 p.m., that BPD has not yet identified the homicide victim.

Authorities say the violence took place in the 2400 block of Ashby Avenue, east of Telegraph Avenue. A woman who had been stabbed at that location somehow made it to the 2600 block of Ridge Road, just north of the UC Berkeley campus, and was able to get help.

As a result of that investigation, police zeroed in on a house on Ashby where they found a body “much later.” No further information about that discovery has been provided.

Friends of a young woman named Emilie Inman, however, said she had some kind of connection to Gomez, and asked Berkeleyside to spread the word to the community Friday that she was missing. According to scanner recordings reviewed by Berkeleyside, her car was found in a driveway at one of the locations searched by police Friday.

Gomez Jr. is studying “Chicanx/Latinx Studies” according to their Facebook page, and is a senior climate action fellow at Alliance for Climate Education. (The “x” is a gender-neutral ending used to avoid a binary designation.) They were deeply involved in the campus activist community.

One person told Berkeleyside she had seen Gomez Jr.’s “advocacy work from a far and was always really impressed about it,” adding, “a lot are still in shock right now and need time to really process everything cause it’s so conflicting to [their] character.”

Wrote one supporter on Facebook: “I pray that my friend is ok …. And that all of this is a lie.”

There was some indication from people familiar with Gomez Jr. that mental health issues likely played a role in Friday’s violence.

Gomez Jr. posted often online about queer and transgender issues, and was deeply concerned about police brutality and a range of social justice causes. They wrote often about the importance of protesting unjust systems and fighting for equity, and expressed support for efforts such as shutting down freeways, “burning chiles at the door of the governor’s office to get them to respond to demands,” and questioning mainstream media on its depiction of crime and the treatment of minorities.

While growing up in Los Angeles, they attended Van Nuys High School.

Gomez Jr. has been involved with UC Berkeley’s Queer Alliance Resource Center, according to the group’s Facebook page, and helped organize a chalk protest on campus related to sexual assault, the Daily Californian reported in September.

Gomez Jr. also appeared in a YouTube video, viewed nearly 35,000 times, entitled “Students at Berkeley Vandalize Trump Cutout, Assault College Republicans.” In the video, Gomez Jr. can be seen tugging at the cardboard cutout, saying, “This is fucked up, this is really fucked up,” while smiling and remaining calm but assertive.

The investigation has already caught the attention of conservative political commentator and writer Ann Coulter, who posted about it on Facebook and Twitter. Many on the right, including members of the UC Berkeley community, have begun pointing at the case to argue against identity politics, preferred pronouns and related issues.