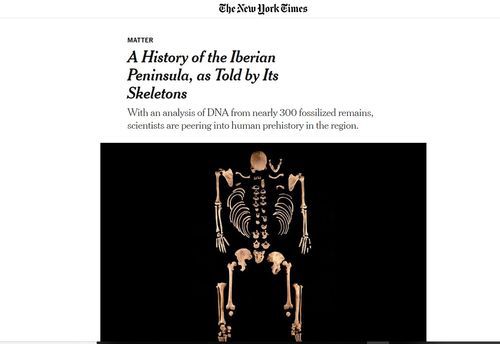 See, earlier, by James Fulford: "Actually, There Has Always Been Migration"—But In Those Days They Called It Invading!

A History of the Iberian Peninsula, as Told by Its Skeletons

With an analysis of DNA from nearly 300 fossilized remains, scientists are peering into human prehistory in the region.

For thousands of years, the Iberian Peninsula — home now to Spain and Portugal — has served as a crossroads.

Carl Zimmer starts off with a lot of talk about migrations and comings and goings and how they’ve happened again and again.

So why are you nativists worried about a few newcomers showing up in your country? Look at prehistory! The same thing happened then. It worked out fine, just fine. It’s migration, it’s natural, it’s inevitable. It’s who we are!

… About 4,500 years ago, still another wave of people arrived, profoundly altering the makeup of Iberia.

A few centuries earlier, nomads from the steppes of what is now Russia turned up in Eastern Europe with horses and wagons.

They spread across the continent, giving up nomadic life and intermarrying with European farmers.

Isn’t that sweet. It sounds so romantic!

When they finally reached Iberia, these people spread out far and wide. “They really have an impact on the whole peninsula,” said Dr. Olalde.

But skeletal DNA from that period is striking and puzzling. Over all, Bronze Age Iberians traced 40 percent of their ancestry to the newcomers.

DNA from the men, however, all traced back to the steppes.

Uh, you know, I’m not an anthropologist, but this Bronze Age Aryan migration sounds … uh … kind of barbaric.

The Y chromosomes from the male farmers disappeared from the gene pool.

Let me guess the motivations of the newcomers/victors: “To crush your enemies, to see them driven before you, and to hear the lamentations of their women.”

But then I’m not a trained archaeologist so what do I know?

To archaeologists, the shift is a puzzle.

“I cannot say what it is,” said Roberto Risch, an archaeologist at the Autonomous University of Barcelona, who was not involved in the new studies. But he ruled out wars or massacres as the cause. “It’s not a particularly violent time,” he said.

Of course it wasn’t a particularly violent time. It’s just that a whole bunch of Aryan barbarians came pouring in off the steppe and wound up with all the surviving women, fathering every single one of their male children.

Instead, Dr. Risch suspects “a political process” is the explanation.

Probably involving Roberts’ Rules of Order. No doubt, it was quite tedious, like a zoning board hearing.

In their archaeological digs, Dr. Risch and his colleagues have found that Iberian farmers originally lived in egalitarian societies, storing their wealth together and burying their dead in group graves.

But over several centuries, palaces and fortresses began to rise, and power became concentrated in the hands of a few. Dr. Risch speculated that the cultural shift had something to do with the genetic shift found by Dr. Olalde and his colleagues.

This urge to retcon prehistory in the most passive voice manner possible, when the genetic evidence of utter barbarism is clear, is awfully strange.

It’s weird how progressives don’t believe in progress anymore. Instead of saying, “Yeah, it was horrible back then. Fortunately, we’ve progressed past barbarism and now have civilized inventions like borders and laws to prevent these kind of genocidal clashes,” they say, “Oh, it was really nice back then. There’s a trope that the Aryan Battle-Axe Culture were violent marauders. Instead, it was … a political process …