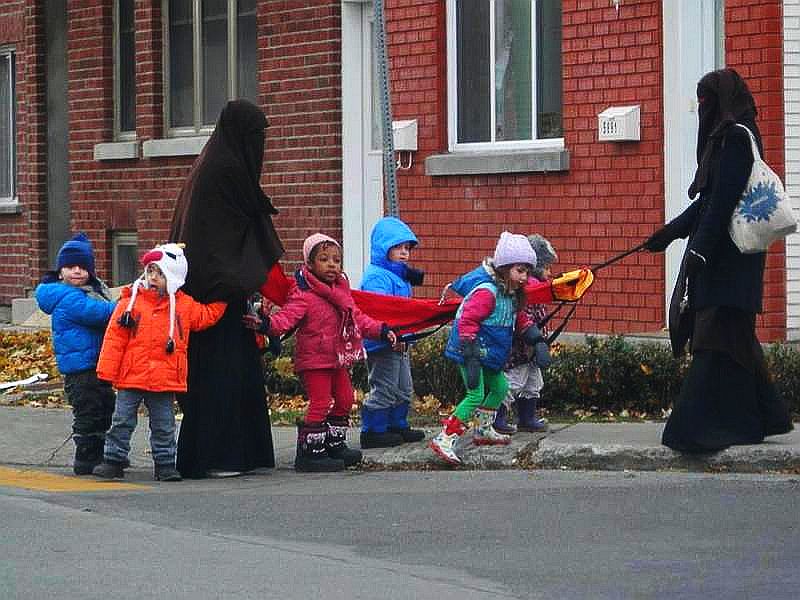 Why would any parent want their child taught by a masked person? You might as well have robotic daycare personnel. Pre-schoolers have smaller vocabularies than adults and rely more on subtle facial communication. Basic social interactive skills are being learned at that young age and kids with masked teachers are being cheated, not to mention confused.

Every child being taught by a burqa person is being propagandized by Islam that women are lesser beings and must be covered up entirely.

MONTREAL — The latest uproar in the religious accommodation debate concerns a photo of two daycare teachers wearing niqabs leading a group of children on a walk through Verdun.

One of Quebec’s best-known radio hosts interviewed the photographer. The picture is being passed around Facebook and Twitter, complete with denunciations of the veil-wearing women, and praise from some who say their children attend the daycare in question.

The photo popped up last week after being taken on Nov. 15, 2013 during the lunch hour at the corner of Verdun St. and Richard St. in Montreal’s borough of Verdun.

Several critics said the photo could not possibly be real, pointing out the discrepancy in the backgrounds of the image with what can be seen on Google Street View.

CTV Montreal went to the intersection and verified that the glass facade visible in Google’s image has been replaced with a dull red brick facade.

Benoit Dutrizac, the host of a popular talk show on 98.5 FM, broadcast an interview on Wednesday at noon with a woman who called herself Elisabeth.

She says she is a real estate evaluator who took the photo last week after being shocked at seeing the niqab-wearing women.

During the interview she said she did not think it was appropriate for women to be wearing such attire in Quebec.

Meanwhile Genee Latreille said she knows the women, and that her son attends their daycare.

On Twitter Latreille wrote, “the teachers are phenomenal, and their dedication is unmatched. Your [Dutrizac's] sensationalism makes me sick.”

Dutrizac replied, “How can you endorse the concept of a woman who hides themselves in public. You should be ashamed.”

Latreille responded with, “On the contrary, I am proud to support such strong and caring women who choose to wear a veil. Vive la difference!”

She later confirmed to CTV Montreal that parents of the children who attend the daycare are drafting an open letter for the public.