Add to the list of Jobs Americans Won’t Do: parking ticket writer. The New York Times informs its diversity-appreciative readership that Bangladeshi immigrants are creating a mini-surge to take the jobs, at least 400 out of 3000 total.

The job pays $29,000 to start and has good benefits. Only a high-school education is required — why aren’t young New York City citizens encouraged to apply?

Instead, a self-appointed ethnic booster, Showkat Khan, arranges meetings of his countrymen to pitch the job as an opportunity to “get a better life.”

Ninety percent of Bangladeshis are Muslim, but the Times doesn’t even mention that aspect. Do they insist upon having prayer breaks with special places to wash their feet? Inquiring minds want to know.

In addition, Bangladesh was ranked as the most corrupt nation on earth in 2005, yet 100 of the Bangla ticket writers have been promoted to full police officers in the NYPD.

Below, Showkat Khan, Bangladeshi booster, helps his countrymen bone up for the US Civil Service Exam. 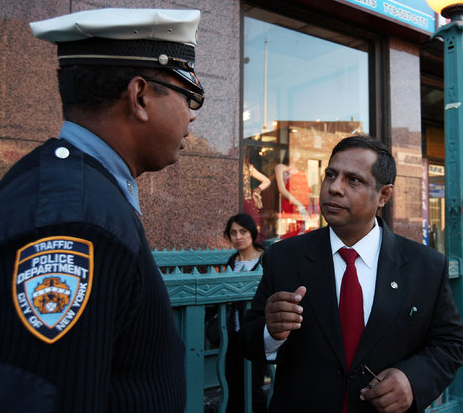 This being a diversity puff piece, we learn that 74,000 Bangladeshis live in New York City. Sometimes the ticket writers hear the suggestion, “Go back to your country” but the foreigners are adjusting now that more of them have learned to speak some English and are less rude (“standoffish”).

Above a Korean fried chicken restaurant in Jackson Heights, Queens, Showkat Khan worked the room of mostly Bangladeshi men, speaking Bengali with a few English phrases mixed in, his enthusiastic message of opportunity broadcast through a crackling amp. At one point, he held aloft a copy of New York City’s Civil Service newspaper, The Chief.

“You are here to make money in this country, and to get a better life,” Mr. Khan said.

There was more than one way toward that American dream, he acknowledged, outlining a few options. But one path seemed to stand above the others, if only because Mr. Khan had already paved the way: He is a traffic enforcement agent.

Mr. Khan is part of an influx of Bangladeshi immigrants who earn a living by writing parking summonses for the city, a curious and growing presence navigating the choking traffic and bumper-to-bumper sea of parked cars.

Bangladeshi immigrants, who represent less than 1 percent of the city’s population, now make up between 10 percent and 15 percent of the 3,000 traffic agents, Robert Cassar, the president of the union representing the agents, said.

The Friday after Thanksgiving, which many New Yorkers mistakenly believe offers a holiday reprieve from usual parking restrictions, is in fact one of the busiest days of the year for traffic agents. Mohammed Chowdhury, who is from Bangladesh and supervises traffic operations for much of Queens, said his officers might write three times as many tickets on that day.

“The next morning, everyone is feeling lazy; and who is going to get up and move the car?” he said. “If there is street cleaning on Friday where you live, almost 80 percent of the cars won’t be moved. They’ll all get ticketed.”

In the last decade, union officials said, at least 400 Bangladeshi immigrants have become traffic agents in New York, opening a new career path to those who traditionally find their way in this country from behind the wheel of a taxicab. City records put the number at slightly less than 200, but Police Department officials said they suspected the number to be higher because many employees do not list their birthplace.

Salaries start at $29,000 a year, but the insurance benefits and pension are generous. A college education and citizenship are not needed; one must be legally eligible to work in the United States and possess a high school diploma. Residency requirements are also slight.

Before becoming an agent, Sheikh Zaman was an airport security guard in New York, a job that did not have the stature of his occupation back home in Bangladesh, where he oversaw murder, rape and robbery investigations for the national police force. He assumed that his chances of securing a job with the New York Police Department were next to nil, but he could not help wondering why he saw so many of his countrymen wearing police uniforms, writing summonses.

“I saw a lot of Bengali people walking around the city, writing tickets,” he recalled recently. He asked how they got hired. “I was surprised,” he said. “They told me this was a very easy job to get.”

Mr. Zaman took a Civil Service test in 2008 and began his new career the next year.

The proliferation of Bangladeshi traffic agents has a lot to do with word of mouth, much of it from Mr. Khan, a 53-year-old traffic agent and union official whose informal advice and encouragement to Bangladeshi immigrants turned into sit-down seminars, in which he helps applicants prepare for the Civil Service exam.

“I had thought having a uniform meant you were born in America; that was a misunderstanding,” recalled Mr. Khan, an energetic man who made a living as an itinerant magician in his native Bangladesh. “When I joined, I opened the door.”

At a recent seminar, one person in attendance, Md. Shamim Al Mamun, 33, said he had been in New York for only 16 days. Asked what he intended to pursue, Mr. Mamun said, “I’m interested in traffic enforcement.”

The work can be challenging. The agents sweat through the summer, shiver through the winter and bristle year-round at the insults shouted as they slip parking tickets under windshield wipers. The insults can be particularly unsettling to new immigrants only in the country for a few months.

“A lot of people say, ‘Go back to your country,’ ” said Jamil Sarwar, a parking enforcement officer for several years. “But I ignored them because I know I’m doing no wrong. I work for the city.”

Of the hundreds of Bangladeshi immigrants who became traffic agents over the years, about 100, including Mr. Sarwar, went on to be police officers, Mr. Khan said.

The influx initially caused some friction.

“Not only was there a language barrier, which is abating, but our Bangladeshi brothers and sisters were very standoffish at the beginning,” Mr. Cassar said. But over time, he added, they have become less insular and more willing to assimilate and adopt what he called “the traffic mentality.”

The tension also extended to Mr. Khan’s seminars. He said the Police Department’s Internal Affairs Bureau had investigated him a number of years ago and questioned him about the sudden surge of his countrymen into the department. Police officials would neither confirm nor deny that an inquiry had taken place.

Mr. Khan said the bureau also wanted to know if he was making income from his job seminars; he said that, in fact, he lost money for each one he held. “ ‘Come to my funeral’ — that is all I would ask of people,” he said.

There are more than 74,000 Bangladeshi immigrants in New York City, according to census figures. At one point, immigrants from Bangladesh were receiving more licenses to drive yellow cabs than any other immigrant group. (It was a somewhat strange affinity; many had never driven in their home country.)

In New York, law enforcement and cab driving have a complicated relationship. Taxi drivers are frequently robbed, and the police often come to their aid. But many taxi drivers resent receiving tickets over infractions that can easily wipe out a day’s pay and threaten their license.

These days, the draw toward the traffic enforcement jobs can be felt in the office of Shah Nawaz, an insurance broker, who specializes in accident policies for livery and yellow-cab drivers. His office, in the Bangladesh Plaza, an office building in Jackson Heights, is as important a port of call for cabbies as the restaurants along Lexington Avenue.

Mr. Nawaz recalled that a cabdriver client had recently scaled back to part-time driving because of a new job as a parking enforcement officer. Not long afterward, a 24-year-old livery driver, who had sat down across from his desk to discuss insurance premiums, acknowledged that he was considering a change in jobs.

“I drive a cab, but I think traffic enforcement is a better job,” the livery driver, Abdul Hafiz, said.

“It is a very prestigious job,” she chimed in, noting that her husband had sent photographs of himself in his blue police uniform to relatives back home.

Parking enforcement jobs, Mr. Nawaz said, had become “a source of pride for a new generation of Bangladeshis.”