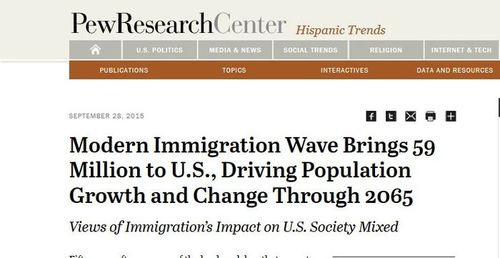 Can We Make Immigration "The Number-One Issue In The 2016 Presidential Election?"

Reacting to the Pew Hispanic Center's report on America's demographic transformation in the 50 years following the (disastrous) Immigration and Nationality Act of 1965 (the "Hart-Celler  Act," though Edward Kennedy was its principal promoter in the Senate), PowerLine blog's John Hinderaker posted an entry on September 28 with the apt title Immigration Is Remaking America.  Is That What We Want?

[T]he sheer numbers are staggering. Pew calculates that without the post-1965 wave of immigration, the population of the United States would be 72 million fewer than it is today. By 2065, Pew projects an additional 103 million, on top of the 72 million.

That number–175 million–is more than the populations of all but five of the world’s countries. As a friend likes to ask, when did we vote for this? The social, economic and environmental implications of this huge accretion to our population are rarely discussed and, as far as I can see, never openly debated.

"Never openly debated."  Who could argue with that?  The suppression of this debate is effectively a malign tradition, plus it's in keeping with what historian Theodore White, already in 1982, had to say about Hart-Celler itself:

The Immigration Act of 1965 changed all previous patterns, and in so doing, probably changed the future of America.  Immigration laws of the previous forty years had rested on the idea of "national origins": New immigrants should reflect the ethnic composition of the nation already here.  The new act of 1965 was noble, revolutionary—and probably the most thoughtless of the many acts of the Great Society.

Hinderaker goes on to quote an unnamed reader's list of basic subjects that should be—and should always have been!—grist for the discussion, namely "the environmental effects, the resource depletion, the density and land use projections and the sheer overcrowding [the immigration-celebrators'] plans entail."

Hinderaker then closes with this flourish:

But this is one subject on which the elites don’t care what we want. Immigration will be the number one issue in the 2016 presidential election, and the candidate who takes the most restrictive position will have a huge advantage.

One hopes that Hinderaker's prediction that immigration will be 2016's supreme subject holds up.  But this may well rest upon enough of us informed citizens making enough noise, insisting that serious, slogan-free discussion of immigration not be lost amid the usual transient trivia of presidential campaigns.

But what does this civic responsibility to push for immigration sanity mean for you?  The best answer ever may have been the one given by Congressman Tom Tancredo [R-CO] when he spoke in Des Moines while he was running for president in 2007:

"People say to me: 'What can I do now, you've got me all riled up about this issue. What can I do?'

"And I always say, 'Well … everything! Everything that you can do.'

You can't be as heroic as Refugee Resettlement Watch proprietess Ann Corcoran, pounding away with multiple posts daily on the refugee scam (an important part of our immigration insanity) and becoming a nationally-recognized expert in the process?  Well of course—very few of us can.

But that's no excuse for doing nothing.  For example, surely you can write letters-to-the-editor to newspapers and, thereby, help keep the pot boiling, just as Congressman Tancredo urged.  I gave some suggestions about that useful activity here, and you'll find some further tips here.

After all, our enemy—I use the word advisedly—is tireless and remorseless.  Consider the Celler of that (cursed) Hart-Celler Act.  That was Congressman Emanuel Celler [D-NY], born in 1888, with four grandparents who'd immigrated from Germany.  First elected to Congress in 1922, Celler bitterly opposed the (blessed) 1924 immigration cut-off.

As Wikipedia summarizes, "Celler had found his cause and for the next four decades he vigorously spoke out in favor of eliminating the national origin quotas as a basis for immigration restriction."  Then four decades plus one year later, he was on the side that won—with his nation and most of his inattentive fellow citizens being the losers.