"Can a Woman Win the Kentucky Derby?"

Since nobody remembers much about the past, it's easy to write articles about how in some particular field women are Real Soon Now going to break through the barriers of discrimination and stereotypes and achieve equality. For example, what about women jockeys? Obviously, there must be a lot of discrimination against them since they haven't achieved much. Maybe the social climate is finally changing in their favor!

Can a Woman Win the Kentucky Derby?

Here is the perception: female jockeys can’t ride. They’re too weak. They don’t have the fight in them. They can’t close — not like men, anyway. Down the stretch, you need a jockey to carry the horse to the end, rally the winded animal and squeeze speed out of weary legs. Female jockeys can’t do that. Or so goes the explanation for why, almost 50 years after women first fought legal battles to become jockeys, there are so few top jockeys who are women.

The sportswriter is here winking to the handful of well-informed readers that he's actually aware of the history of women jockeys, but most readers won't notice what he's doing. My guess is that he's recounting his observations, just labeling them as Stereotypes.

The 113-pound New Jersey native isn’t just the most successful “girl jockey” on the horse-racing circuit today; she’s one of the best American jockeys, period. Last year, she amassed more than $12.4 million in earnings, eighth-best in North America. Her horses finished in the top three in nearly half the races she entered. So far this year, she ranks fifth in earnings, leads all jockeys in victories and has picked up her third consecutive riding title at the New Orleans Fair Grounds Race Course.

Some of her male competitors are less than charitable about the reasons for Napravnik’s success. “Look at me,” a veteran jockey was saying before a race in New Orleans last month. “I’m 53 years old, brother. I’m going to walk into a paddock, and I’m going to talk to these owners and their wives and stuff. And there’s little Rosie. She’s going to bounce out of there. A pretty little girl, good disposition. And she’s going to be talking all nice to them. Now, which one of them would you rather leg up on your horse?” ... Now, at 25, she is one of the more provocative figures in racing, heckled at times by critics who don’t think she belongs on the track while being asked for her autograph by fans. ...

I don't know that much about horse racing, but I had a Sports Illustrated subscription in the early 1970s when SI covered more sports than just NFL/NBA/MLB. The early 1970s were the Golden Age of female jockeys getting favorable media publicity. One female jockey, Robyn Smith, was on the cover of Sports Illustrated 41 years ago. Here's Frank Deford's 1972 cover story on her.

Then, in 1980 Smith married the octogenarian Fred Astaire. After his death in 1987, still feeling the need for speed, Smith took up flying, and by 2000 was working as a corporate jet pilot.

Another female jockey who was much celebrated when I was young was Mary Bacon, whose success on the track and good looks led to a Revlon modeling contract and the cover of Newsweek's 1974 "Women in Sports" issue. Here's the opening of a 1974 People article about her:

Mary Bacon Is Queen of the Turf 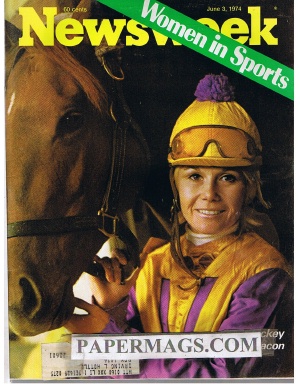 In her career as a jockey, Mary Bacon has been kidnapped, knifed and shot at, and in racing accidents has suffered a broken back twice, broken hands and feet, a crushed pelvis and a punctured lung.

Through it all, the 5'4" Mary has triumphed like some kind of charmed soap opera heroine.

However, Bacon gave a speech at a Ku Klux Klan rally in 1975 and that wrecked her career.

The larger pattern is that the door has been open to female jockeys for over 40 years. But, riding thoroughbreds remains a dangerous job needing a high strength to weight ratio. That female jockeys haven't, on the whole, had more success lately than they had 40 years ago suggests that racing is just one of those sports where an exceptional woman — like Lynn Hill in rockclimbing or Judit Polgar in chess — can make it to very near the top, but that the bell curve of talent and drive is simply shifted more in the male direction.

But, as handy as bell curves are for understanding the way of the world, they don't make for a pleasing Narrative. A Napravnik, a Hill, a Polgar are pretty interesting as women achieving in a male field, but the press's need to frame every story as part of a trend by, say, ignoring how pro-feminist the 1970s were, gives a fundamentally distorted picture of the world.